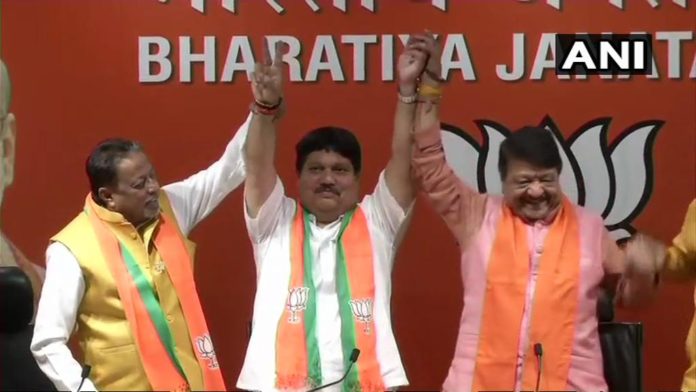 Newly inducted in Bharatiya Janata Party, Arjun Singh, a former Trinamool Congress Leader in West Bengal on Wednesday claimed that the over 100 Lawmakers from Mamata Banerjee‘s TMC will soon change their outfit to join the saffron party.

‘More than 100 MLAs from West Bengal ruling party will join BJP very soon’ said Singh who has been given a ticket by BJP from Barrackpore Parliamentary Seat.

Claiming that many of the legislators are in touch with his ‘new party’, Singh said, many will join trucks ahead of the Lok Sabha Polls 2019 while many will join after the national elections.

However, he chooses to skip the question of whether there are cabinet members who are in a queue to join the Bharatiya Janata Party. Singh replied, ‘I will not comment on that, as soon as I’ll make a comment, those will be dropped from Council of Ministers.

Four-time MLA from Bhatpara Assembly Seat, Arjun Singh has recently joined Bharatiya Janata Party and has been nominated as BJP’s candidate from Barrackpore Parliamentary Seat. He is considered as an influential State leader, with a hold in several other Assembly segments in the Barrackpore parliamentary seat.

Arjun Singh is considered to be very close with Mukul Roy, who was once Mamata Banerjee’s right-hand man.

It is noteworthy that many TMC Leaders in recent past has shift loyalties to BJP in West Bengal including TMC MP Anupam Hazra.

Bhartiya Janta Party in a run-up to the General Elections 2019 in West Bengal has already started rolling out lists of Candidates. Ruling Trinamool Congress has already announced its candidates on all 42 Lok Sabha seats with over 40% tickets distributed to female candidates.

BJP in the state will take on TMC, Congress and CPI(M) led left front