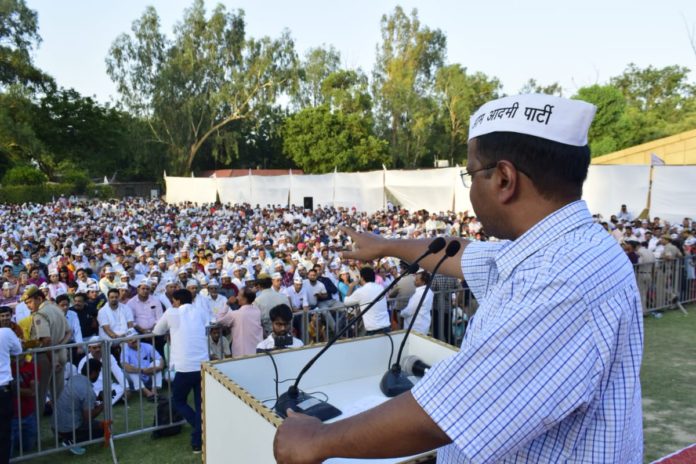 Delhi Chief Minister and Aam Aadmi Party National Chief Arvind Kejriwal on Sunday held a dialogue with party workers in the national capital days after it faced a humiliating defeat in the recently held national polls.

Speaking in the event where thousands of workers gathered, AAP Chief Arvind Kejriwal asked party workers not to get dishearted with party’s poor performance in the polls and asked them to prepare for Delhi State polls slated for next year.

Motivating his party workers, Kejriwal said that he is confident of securing over 50% votes in the state polls as they have got in 2015 when they registered a massive victory in the national capital bagging 67 seats out of the 70 Assembly seats.

He also congratulated Prime Minister Narendra Modi for coming back to power for the second term. He said he hopes that the Central Government will work together with Delhi government for the betterment of the people of the national capital.

He, in a motivating tone, told his party workers that these elections were between Rahul Gandhi vs Narendra Modi. People voted to elect a PM and not for AAP in these elections. ‘But the coming elections in Delhi is for us’, Kejriwal said while urging workers to prepare for Delhi State Workers.

Hailing his government’s work in the national capital, Kejriwal said if Delhi had elected a BJP government, Schools would have been transformed ? would Mohalla Clinics been setup? He further told his workers to reach out to Delhi Voters seeking support for the party for their work in the last 4 years.

“Some workers are depressed, you don’t have to be depressed, your party has done a great job, you need to go up the collar”, said Kejriwal. Along with Kejriwal, AAP Leaders Gopal Rai, Manish Sisodia, Atishi and others were also present during the interaction.

AAP in the national capital lost all 7 seats in recently held general elections and slip to the third spot in 5 seats with 3 of them losing deposits. Its vote share came down drastically to 18%, which is 15% less than it got in 2014 national polls.

The Bharatiya Janata Party in the recently concluded national polls has secured 303 seats, 22 more than it got in 2014. While BJP along with its allies, the NDA secured 352 seats. BJP swept all 7 Lok Sabha seats in the national capital.