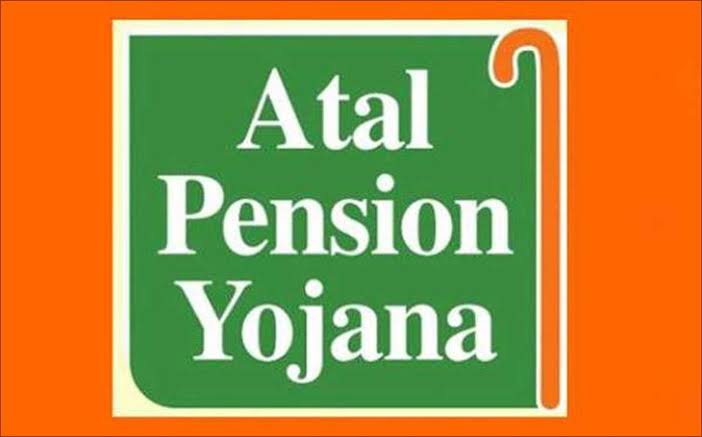 Atal Pension Yojana is a scheme launched on 9th May 2015 by Prime Minister Narendra Modi to make the senior citizens self-reliant after their retirement. The scheme aims to increase the old age income security of the working poor. The Government launched the scheme which came into effect from 1st June 2015. It replaced the Swavalamban Yojana/NPS Lite scheme.

The APY scheme is being administered by the Pension Fund Regulatory and Development Authority. It aims to provide a universal social security system for all citizens, especially the poor, the underprivileged and the workers in the unorganized sector.

The Atal Pension plan scheme is open to all citizens of India between 18-40 years of age having a savings bank account in a bank or post-office.

Earlier pension schemes of social security were unable to address the peculiar demographic settings of the country. Swavalamban Scheme was not able to cover many people due to ambiguities in benefits. Swavalamban also failed to guarantee a minimum pension provision.

Moreover, the unorganized sector which forms a large chunk of our labor force was not covered in true sense. This all led to the formation of an integrated scheme for this section i.e. Atal Pension Yojana.

Atal Pension Yojana Information can be accessed from below-

The APY eligibility is open to all bank account holders who are currently not covered under any statutory social security scheme. Any eligible person who wishes to apply has to furnish proof of Aadhaar number or if he does not have it, may go for enrolment under Aadhaar authentication

Age of joining and contribution period

The minimum age of joining APY is 18 years and maximum age is 40 years. Therefore, the minimum period of contribution by the subscriber under APY would be 20 years or more.

Under the Atal Pension scheme, the Central Government’s co-contribution will be 50% of the subscriber’s contribution up to Rs. 1000 per annum. It will also reimburse the promotional and development activities which include an incentive to the contribution collection agencies.

To understand the funding pattern, let’s take an example- 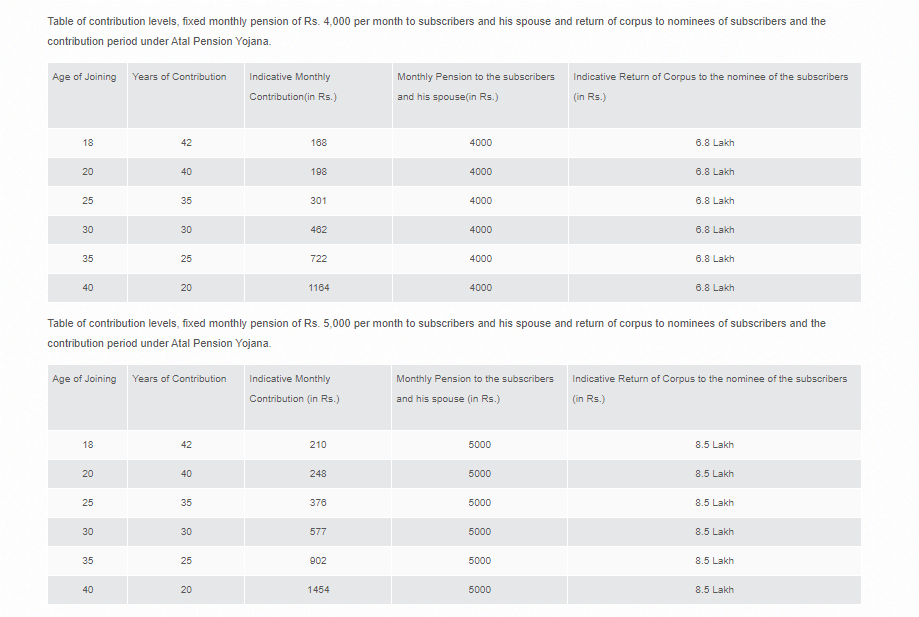 Atal Pension Yojana has been often compared to the New Pension Scheme for its similar focus. However, there exist starking differences between the two schemes.

Joining age- The joining age of the New Pension Scheme is 18 to 55 years, while Atal Pension Yojana has the entry age 18 years and the maximum age being only 40 years.

Eligibility-  Only an Indian resident can join Atal Pension Yojana while NPS can be joined by Indian citizens as well as NRIs.

Tax Benefit- Atal Pension Yojana doesn’t provide the applicant with any tax benefits while the New Pension Scheme provides investors of this scheme a tax rebate of up to Rs. 2 lakhs.

Premature Withdrawal- An individual will not be allowed to withdraw the money prior to the end of the scheme in Atal Pension Yojana unlike that in NPS.

Investments- Atal Pension Yojana does not give the option of choosing the investment of your choice while the New Pension Scheme provides investors with various options in which he/she can choose to invest their money.

Government Contribution- The government provides the investor with the option of monetary support in Atal Pension Yojana. However, the New Pension Scheme does not provide any kind of government support. Here, all contributions will be done by the investor only.

For increasing awareness about the scheme, periodic advertisements in print and electronic media are being resorted to. Apart from that, the administration is organizing periodic meetings with bank officials for reviewing the progress of the scheme. Town-hall meetings and SLBC meetings also given due significance by the banks.

As of 3rd July 2019, 1.68 crore subscribers were enrolled under the scheme. The region-wise data of detailed enrollment from various states and UTs can be accessed from the following link.

The social security scheme like Atal Pension Yojana is a very comprehensive step needed to expand the security net of senior citizens. Previously, the unorganized sector was not covered in its true essence, but now with the inception of this scheme, one can say that the government is right on its track to achieve its motto of “Sabka Saath, Sabka Vikaas“.