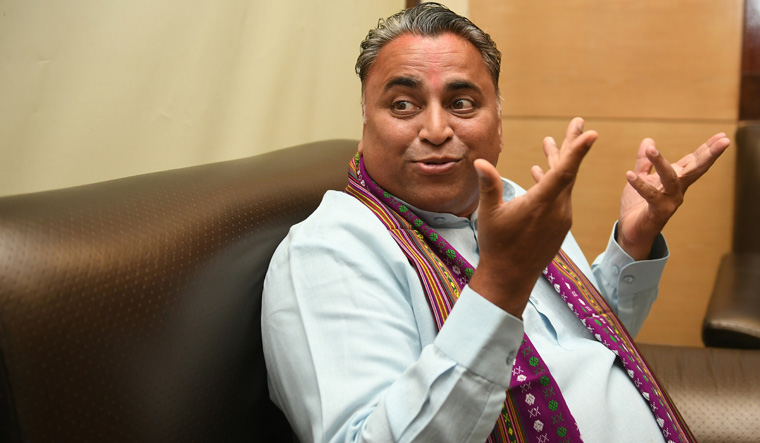 New Delhi, May 17: The BJP will cross the majority mark without West Bengal and the state will help the party in crossing the target of 300, says BJP Secretary Sunil Deodhar, who is credited as one of the key architects of saffron party’s victory in Tripura where it ended 25 years of Left Front rule in 20018.

In an interview to IANS, he said the Bharatiya Janata Party would win 27-30 seats in the state and the Trinamool will be wiped out in next Assembly polls and for this credit would go to Chief Minister Mamata Banerjee and her Muslim appeasement politics besides Prime Minister Narendra Modi’s mantra of “sabka saath, sabka vikas” (development for all).

“When I came to Bengal, I thought we will be able to win 20-21 seats and I had then said ’19 me half 21 me saaf’ (In 2019 Trinamool’s seat count will be halved and in 2021 Assembly polls, it will be wiped out). Now, I can say we will win 27-30 seats and Trinamool will be wiped out in 2021 Assembly polls,” said Deodhar, who has been deployed in the state by the party leadership for the nine Lok Sabha seats that go to the polls on May 19 in the last phase of elections.

He exuded confidence that the BJP would snatch six out of nine seats from the Trinamool.

Asked whether the BJP was focussing in West Bengal to compensate for the possible losses in Hindi heartlands, he said: “No…no…no…Bonus… Bengal is going to be a bonus. The BJP will cross the majority mark without West Bengal. In fact it will help the party in crossing the 300 mark. Don’t say it a compensation….it will be a bonus…”

Deodher, who played a key role in Modi’s election campaign in Varanasi in 2014, claimed West Bengal results are going to be a “shocker” like the BJP’s 2014 victory in Uttar Pradesh.

“For this (change), credit would go to Mamata Banerjee. She herself has put the final nail in the coffin. Log pairon par kulhadi maarte hain, Mamata kulhadi par pair maar rahi hain (she is causing harm to herself),” he said.

The BJP leader said there is strong wave against Mamata Banerjee for her policies of Muslim appeasement and a pro-BJP wave for Modi’s “sabka saath, sabka vikas” as people of the state experienced both leaders’ model of governance.

“Mamata did everything to appease Muslims whereas Modiji was working for every section of the society without any discrimination. He opened bank accounts, gave gas cylinders, provided power and houses without differentiating who is Hindu and who is Muslim. He is the Prime Minister, who kept the country secure on land, sky and even in space,” he said.

“In the last few years Bengal has transformed (in BJP’s favour).”

Deodhar said the Communists ruled West Bengal for 24 years and Tripura for 25 years by resorting to political violence, murders and stopping people from using their constitutional right to vote and even put a bar on holding political activities and party functioning.

“Mamata Banerjee came to power in West Bengal fighting against these ills. What the Communists were doing earlier is what the Trinamool is doing in Bengal today. Now people of West Bengal want to get rid of her. With the help of police and administration, she is spreading a sense of fear among the people. She is making last-ditch efforts to remain in power. But ‘jeetegi to BJP hi aur ayega to Modi hi’ (BJP will win and Modi will be the PM again),” he said.

Deodhar, who is also in-charge party affairs in Andhra Pradesh, justified the need for National Register of Citizens (NRC) and Citizenship Amendment Bill, saying these were required in the entire country to stop infiltration.

“Identifying and deporting illegal Muslim immigrants is a must. The basis of the Partition was cummunal. It was on the lines of Hindu-Muslim. Hindus did not ask for a separate country. Muslims did. So the Hindus who were staying in the then West Pakistan and East Pakistan have every right to come back to their own country and get citizenship. So, the NRC and the Citizenship Amendment Bill is required for the country and as well for West Bengal,” he said.

Deodhar, a key person behind organising BJP President Amit Shah’s roadshow in Kolkata on May 14 that witnessed a clash between BJP and Trinamool workers, accused Mamata Banerjee of conspiring to break a statue of 19th century social reformer Ishwar Chandra Vidyasagar.

“For political interest, they broke the statue. Bengal is not going to forgive her (Mamata). Ishwar Chandra Vidyasagar was a Bengali polymath and a luminary who changed the Bengali alphabet and type. If Mamata Banerjee is so concerned about him, why has she closed Bengali medium schools in Kolkata?” he asked.