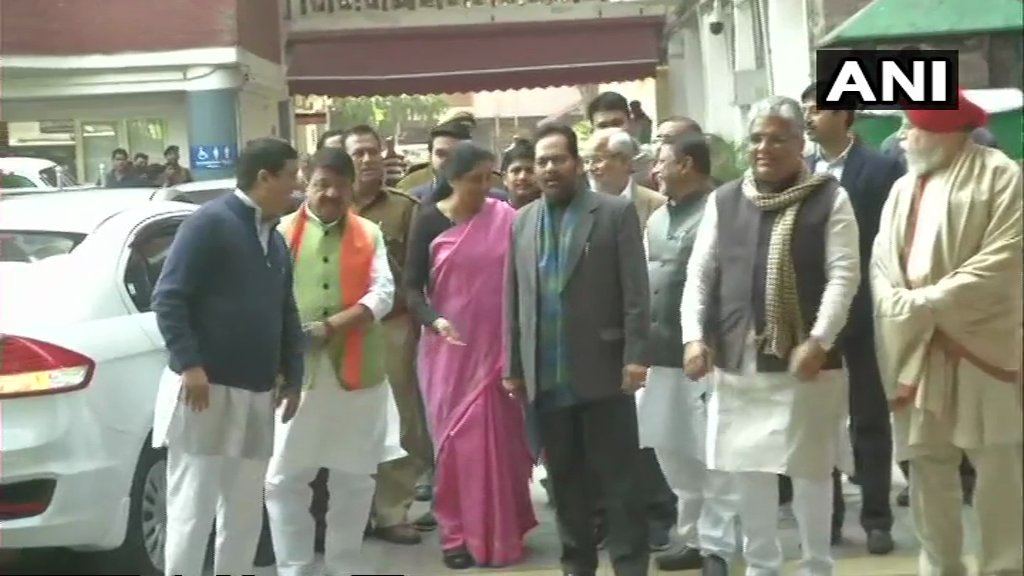 The High-level Delegation also raised the issue of ‘Blocking rallies’ by the Mamata Banerjee‘s West Bengal. Talking to Media, Union Defence Minister Nirmala Sitharaman said, ‘In the interest of wanting a free & fair environment in which LS polls can be conducted, we have come to bring to the notice of EC certain happenings in WB which has complete cooperation of TMC. Instances we highlighted to point out that TMC doesn’t believe in democracy’.

She added “The party which is ruling in the state and its supporters are out in the open to ensure that no other political party gets permission to carry out its legitimate activities ahead of the polls.”

Nirmala Sitharaman: In interest of wanting free & fair environment in which LS polls can be conducted,we have come to bring to the notice of EC certain happenings in WB which has complete cooperation of TMC.Instances we highlighted point out that TMC doesn't believe in democracy pic.twitter.com/9sVZ0yDBkb

Union Minister Mukhtar Abbas Naqvi while talking to reporters said, “A high-level delegation of the BJP met the EC officials on Monday. During the meeting, we have demanded the poll panel to thoroughly assess the alarming situation in West Bengal. We have also requested the poll panel to remove those state government officers who are acting as the agents of the state government and the deployment of the central armed forces for the smooth, free and fair conduct of the election in the state.”

”During our meeting with the poll panel officials, we apprised them of the extremely dangerous situation in West Bengal where the central government officers are being threatened, allegedly detained and the raised the issue of repeated denial of permission by the TMC government to BJP leaders and their rallies across the state,’ Naqvi said.

Earlier, on Sunday UP Chief Minister Yogi Adityanath’s helicopter was denied landing permission in Mamata’s Bastion. Earlier Similar situation outbursted during BJP’s National President Amit Shah‘s visit to the state on January 22. A controversy over the Visit erupted after West Bengal Government refused to give permission to the state BJP to land party president Amit Shah’s chopper at the Malda airstrip.

Amit Shah during his address accused Mamata Banerjee Government of rigging the Panchayat Polls. “This election won’t be like panchayat elections. Central forces will guard the polling centres.”

Following which, banking on support from all Opposition Parties, CM Mamata Banerjee started a sit-in on Sunday night to protest against what her Trinamool Congress party alleged a “coup” by the Narendra Modi government