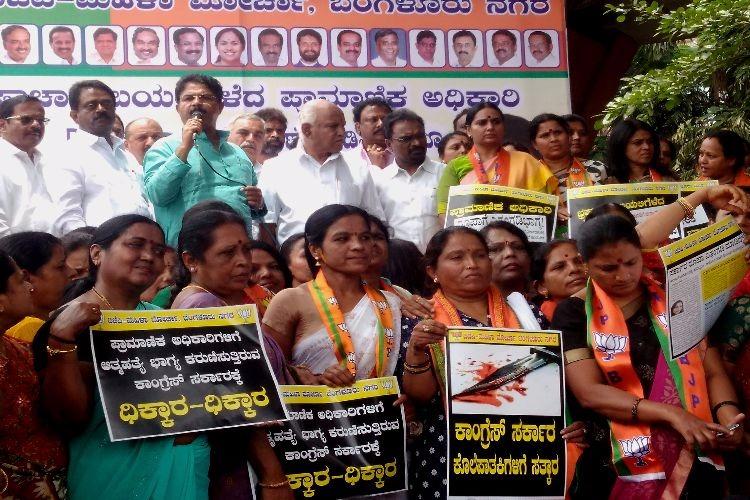 BJP in Karnataka called for a protest on DIG Roopa's transfer demanding Karnataka chief minister Siddaramaih to cancel his orders.

Deputy inspector of prison (DIG) Roopa Moudgil had submitted a report to the government saying that AIADMK General Secretary and convict VK Sasikala Natarajan, her sister-in-law, Elavarasi and nephew VK Sudhakaran were getting the royal treatment in the women’s cell. She had also mentioned about the illegal supply of drugs in the prison.

Regarding this Karnataka Chief Minister Siddaramaiah had said that strict actions will be taken against anyone found guilty in the case. She had also accused  DGP  Satyanarayana Rao, to be involved in the case have to have received a bribe amount of Rs 1 crore from Sasikala in return of special treatment in the jail. However, instead of investigating about the report submitted by Roopa, the CM has issued her transfer orders.

On Monday, Siddaramaiah defended his action of transferring Deputy Inspector General (Prisons) D. Roopa, stating that the action was taken in view of the Government’s commitment to public interest, truth and justice.

Responding to the transfer orders of Roopa, BJP in Karnataka on Wednesday, called for a protest throughout the state, demanding Karnataka chief minister Siddaramaih to cancel his orders. BJP Karnataka Chief B.S. Yeddyurappa in his statement to the press said that the law and order conditions in the state has completely collapsed. He further added that “the manner in which Congress transferred DIG Roopa for exposing corruption reveals the testimony of the party’s culture.”