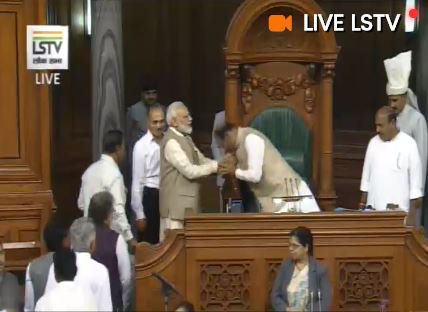 His candidature was proposed by Prime Minister Narendra Modi in the Lok Sabha which was supported by the opposition parties including Congress and Trinamool Congress (TMC). While Jagan Mohan Reddy‘s YSRCP and Naveen Patnaik‘s Biju Janata Dal also backed the proposal for Om Birla’s election for the post of Speaker of 17th Lok Sabha.

BJP MP from Kota, Om Birla elected as the Speaker of the 17th Lok Sabha. pic.twitter.com/Cuwe3zbRSA

Speaking in the Lok Sabha, PM Modi congratulated Om Birla and said, ‘t is a matter of great pride for the House and we all congratulate Om Birla Ji on being unanimously elected as the Speaker of the Lok Sabha. Many MPs know Birla Ji well. He has served in the state of Rajasthan as well’.

He added, ‘Personally, I remember working with Om Birla Ji for a long time. He represents Kota, a place that is mini-India, land associated with education and learning. He has been in public life for years. He began as a student leader and has been serving society since then without a break’.

PM in LS: Personally, I remember working with Om Birla Ji for a long time. He represents Kota,a place that is mini-India, land associated with education&learning. He has been in public life for yrs. He began as a student leader&has been serving society since then without a break. pic.twitter.com/S3qZ1T0XgM