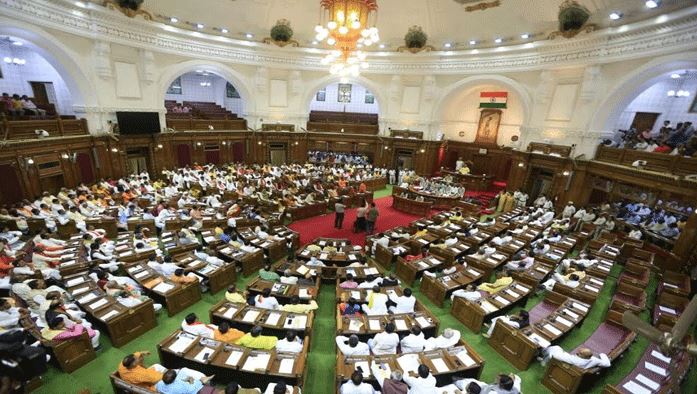 In an unprecedented move, Bharatiya Janata party MLAs staged protest against their own government on Tuesday, after a party lawmaker accused the present regime of harassing him in the Uttar Pradesh assembly.

During the Assembly session, Loni constituency’s BJP MLA, Nand Kishor Gurjar alleged harassment by the Ghaziabad district administration and police. However, the parliamentary affairs minister Suresh Khana told him to sit down.

On the other hand, leader of opposition in UP assembly and Samajwadi Party MLA, Ram Govind Chaudhary supported the MLA and said that he should be allowed to speak. The same demand was also raised by other opposition leaders. However, UP assembly speaker Hriday Narain Dikshit did not allow Gurjar to speak and adjourned the house for the day.

Furious for not being able to speak, Gurjar sat on a dharna inside the assembly and was later joined by several other BJP MLAs. Opposition MLAs from Samajwadi Party and Congress also joined the BJP MLAs in their protest and raised slogans – “Vidhayak Ekta Zindabad”.

More than 100 lawmakers reportedly cutting across the party lines were part of the dharna which went on for almost three hours including the members of the state legislative council. However, there is no official confirmation on the exact number of lawmakers who expressed solidarity with Gurjar in the floor of the house.

Deputy Chief Minister of Uttar Pradesh, Dr Dinesh Sharma went inside the house and tried to convince the protesting BJP MLAs but failed to convince them. Later, Gurjar along with the other protesting MLAs went to meet the state assembly speaker. As per reports, the MLAs demanded that officials in Ghaziabad who allegedly harassed Gurjar and his family should be summoned in the assembly and action should be taken against them.

On December 6, the UP police had accordingly arrested two representatives of Gurjar following the official complaint that was filed on November 27. Interestingly, when the official complaint was filed against him and his representatives, Gurjar had also written a letter to the CM Yogi Adityanath saying that he should also be booked under the sections so that he can stay secure inside a jail as he was convinced that some people wanted to kill him.

CM Yogi sends out stern warning after police crackdown in UP