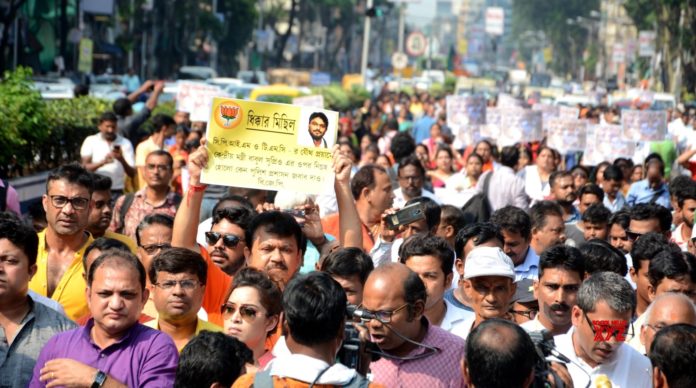 Bhartiya Janta Party took out a march in Kolkata city to demonstrate against the attack of Babul Supriyo. Babul Supriyo (Union minister for environment, forest, and climate change) was heckled and detained by the students of Jadavpur University on Friday.

BJP leaders Sayantan Basu and Raju Banerjee led the protest rally against the incident. The rally saw its course from BJP headquarters in the state to the central Kolkata. The rally demanded immediate action against the accused. It was reported that Babul Supriyo had gone to attend the ABVP event in the college, but students of Left union cornered him.

Sayantan Basu, leading the rally said that Left students should be beaten up. The attack was a staged act of CPI and Trinamool Congress.

The situation turned into a heavy political drama, due to which, Governor Jagdeep Dhankhar had to rush to the college to rescue the BJP leader. The state governor and BJP leader were finally able to leave the campus in late evening hours.

Governor’s step has been condemned by the Trinamool Congress. The party said that the governor should have taken the step after discussing with the elected government. The party claimed that Chief Minister Mamata Banerjee had urged the governor to act as a constitutional head and not take any action at the moment, but yet still went to the college campus.

Babul Supriyo also took to Twitter to express his sadness over the incident.

Governor spoke to the VC of #JadavpurUniversity & indicated to him that it was improper for him not to have taken prompt steps in the matter, that can lead to unwholesome results.This is a very serious reflection on the law & order of the state