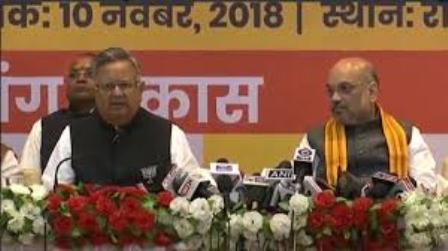 BJP president Amit Shah along with the Chief Minister of Chhattisgarh released the party’s manifesto for the forthcoming state assembly election on Saturday. The manifesto promises to undertake several developmental projects and ensure a “Naxal free” state.

Talking about the manifesto, CM Raman Singh said that the free salt Yojana will continue andfarmers over the age of 60 years will get Rs 1,000 as pension. He also said that the MSP will be raised by 1.5 times to increase the income of farmers. The manifesto also contains promises of providing a proper home for all by 2022.

Singh further added that super-speciality hospitals will be built in Ambikapuram and Jagdalpur and also a provision of Rs. 1lakh for UHS insurance. He also promised a film city in Chhattisgarh and development of the state capital region which includes the areas of Raipur, Atal Nagar, Bhilai, Durg and Rajnandgaon.

Some other highlights of the manifesto were establishing protection laws for journalists and advocates and form a photojournalist welfare board. Providing free education and scooters for the deserving students and free bicycles for students taking admission in Class 9 onwards in order to encourage students to pursue senior secondary schools and promote higher education.

In its manifesto, the BJP has also promised two lakh pump connections to the farmers in the next five years. It has also promised scholarship schemes for SC ST students. The party has also said that they will build concrete houses for urban poor and rural families; provide unemployment allowance for the unemployed youth; give Rs 1,000 medical allowance to pensioners;  Rs 1 lakh medical insurance cover for poor families; Rs 5 lakh insurance cover for the small traders.

Amit Shah after releasing the manifesto claimed that the last 15 years rule of the BJP is a model of an ideal state. “Raman Singh government has successfully tried to contain the Naxal and made the state an education hub. This manifesto is for Naya Chhattisgarh,” he said