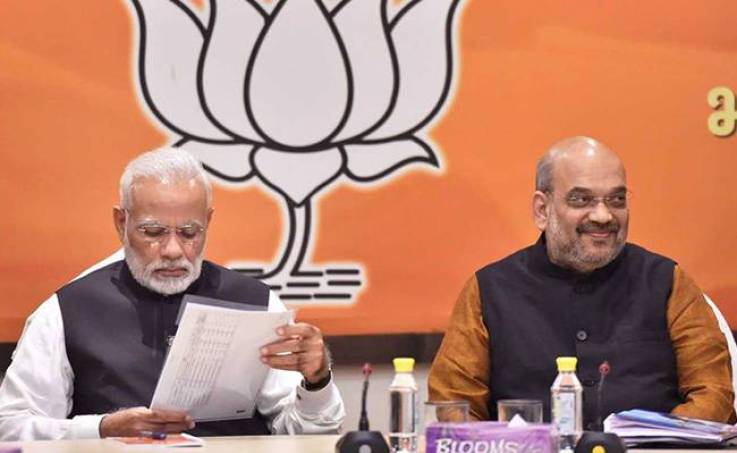 Gujarat assembly elections, to be held in two phases on 9 and 14 Dec has captured the attention of all around the nation, giving the major drama that it is featuring. The fight for the throne may be between the BJP and the Congress but it seems like the battleground is seeing far more battles than the one between the two political parties.

Recently, BJP had announced its list of candidates, which gave rise to differences amongst the party members. BJP is known for dropping down on the sitting MLAs and giving tickets to new faces in order to fight anti-incumbency, however, the first list of candidates is speaking a different story this time. Now, whether this is a deliberate tactful move taken by the party or there some other intention that the party has broken its trend of dropping off the sitting MLAs.

After the party released its first list of 70 candidates, it had to witness a lot of uproars, as several party members got onto the roads to protest against the decision taken by the party. BJP lists showed that as many as 49 sitting MLAs have been given the ticket again, which is not really the policy of the BJP. Prime Minister Narendra Modi, when he was the Chief Minister in Gujarat, it was his hallmark of the Modi led BJP to give tickets to new faces in order to curb anti-incumbency if any. This policy of Modi-led BJP had helped the party win three times in Gujarat.

But it seems like BJP is trying to play safe this time, or at least this is what the first list is suggesting, by not taking a risk to five tickets to new faces. The other major point that is actually at the top of the list for all political parties is maintaining the balance between all communities while distributing the seats.

In the candidate list, special attention has been given to the caste equations and categorically the Patidars, who have almost become the game changers, as their support will definitely be a deciding factor for the results. In the list of 70 candidates, 15 Patidars have been given place. Apart from this, 8 candidates from Thakor cast and 4 women candidates are also included in the list.

The Patidar agitation has been the hotbed in the battleground of Gujarat. The Patidar community can be categorically divided into three economic sections.

According to Ghanshyam Shah, an Ahmedabad-based political analyst, as per the data, 70% of the vote for the BJP came from the upper and lower middle class Patidars. In wake of the widespread agitation led by Hardik Patel, BJP will suffer a vote loss of minimum 40% and the remaining 30% may go to the Congress or independent candidates.  The big businessmen are as said not much affected by the agitation and the reservation will not matter much to them, will continue to be on BJP’s side, extending their support to them.

Ghanshyam Shah, trying to explain the reasons for the distribution of tickets said that “When the Patidar agitation was at its peak and Anandiben Patel was to be replaced, it was Nitin Patel, who was to succeed her. At his residence in Mehsana, people were ready for a celebration but at the last moment, Vijay Rupani’s name was announced. One can understand Nitin, who was close to Anandiben, being sidelined. Hence it cannot be refuted that Patel is being repeated from Mehsana knowing that he has become unpopular owing to both his high-handed behavior and the aftermath of the Patidar agitation.”

By including 15 Patidars in the list, BJP has sent a prominent message to the protesting community. Hardik Patel who has been demonstrating against the ruling BJP has almost joined hands with the Congress and 8 of the supporters of Patel have also been accepted by the opposition to contest the polls.

It seems like the Patidar agitation has come far away from its original goal of reservations and now has become a political agenda, where both BJP and Congress are trying hard to prove themselves as the real well wishers of the community to lure them to their side.

As soon as the list was released, several BJP leaders demonstrated to protest against the party. BJP has given 15 seats to the Patidars, and Five turncoat MLAs from Congress – Raghavji Patel, MLA from Jamnagar Rural, Dharmendrasinh Jadeja from Jamnagar North, Ramsinh Parmar from Thasra, Mansinh Chauhan from Balasinor, Kheda district and CK Raulji from Godhra.

Rajkot is considered as the prestige seat for Gujarat as it has been and predominantly an urban constituency in BJP’s fold since 1985 and has also given two Chief Ministers to Gujarat. Narendra Modi had also contested from the same seat in a 2002 by-poll and got elected as chief minister. Incumbent Chief Minister Vijay Rupani has once again filed nominations from Rajkot West, he will be getting a tough fight from Indranil Rajguru. he is currently a Congress MLA from Rajkot East but has openly declared that he will contest from Rajkot West this election to defeat Rupani.

Rajguru is one of the richest MLA and has declared assets worth Rs 122 crore, he has openly challenged Rupani and announced a political war to defeat the Chief Minister.

Another major reason for playing on the safe side for the seat distribution is the Karadiya Rajputs’ ire that the BJp has been recently facing. BJP has fielded party state president Jitu Vaghani from his old Bhavnagar West seat. Jitubhai Vaghani has until recent times had enjoyed the complete support of the Patels of the region. However, after the Patidar agitation gained pace the support of the Patels for the BJP throughout Saurashtra is on shaky grounds.

As if the Patidar protest was not enough for the party to handle, Karadiya Rajputs also began agitation against the BJP president last month. The differences between Jitubhai and a sarpanch of a village of the constituency in a matter related to gauchar led to the protest with the local Rajputs. The protest became so vehement that they even demanded the resignation of Vaghani.

Congress not leaving the opportunity to take advantage of this has been very vocal about Patidar issues in the Saurashtra region and reached out to the Rajputs as well. Congress MLA Shaktisinh Gohil had contested and defeated Vaghani by about 7000 votes in the assembly elections of 2007 and the Congress is thinking of fielding Gohil once again against Vaghani from Bhavnagar West.

BJP faced a lot of dissidence and protest from within the party after the first list of candidates was released, few were unhappy that deserving MLAs were dropped off and few were unhappy that non-deserving candidates were being renominated. About 30 BJP leaders from Kamigadh in Amreli constituency have resigned to protest the party’s decision to nominate Bavku Undhadh.

Kamlesh Natu Parmar, the leader of the opposition of the district panchayat of Vadodara, also resigned from the party citing that “There are about 120,000 Kshatriyas in the constituency, yet we did not get proper representation. I shall contest as an independent candidate.”

The list, unlike BJP, had only 16 new names and the most prominent among them was the name of the former superintendent of police of Chhota Udaipur, PC Baranda. He had requested a voluntary retirement from the police and it was approved by the state government on 15 Novand the very same day Baranda joined BJP. He will be contesting the elections from Bhiloda seat Chhota Udaipur, which is reserved for STs.

Currently the hot topic in Gujarat elections is the Patidars and there is no doubt about it that both BJP and Congress is taking care of the minutest of details so that they may somehow win the support of the Patidars and this could be seen in the list of BJP, where the Patidars hold 15 seats whereas in the Congress list only 2 Patidars were nominated.

Patidars are considered as the step to reach the final throne. Originally the Patidars were the supporters of the Congress, however during the 80’s they came into the court of BJP and since then became their core supporters.

Senior BJP leader and former Gujarat Chief Minister Keshubhai Patel played an important role in combating Patidar society on BJP side. Keeping in mind the slogans of then Prime Minister Indira Gandhi’s “Garibi Hatao” and the caste equations of Gujarat in the 80’s, Congress focused its attention on ‘Kham’ coalition (Kshatriya, Harijan, Adivasi, Muslim). Patidars were not quite happy with the Congress following the Kham policy and BJP took advantage of this Since then, the Patidar society had become the core vote bank of the BJP and it was playing a vital role in BJP’s victory.

But after the Patidars started demanding reservation under the OBC quota and BJP did not pay much heed to the demands, the community has been protesting against the ruling BJP in Gujarat.

Giving 15 seats to the Patidars BJP has played a tactful move or is there some hidden conspiracy behind it, is not so easy to make out. But the results of the Gujarat polls are surely going to be a game changer for both BJP and Congress. It will pave the path for the Lok Sabha elections due in 2019 and will also show where BJP stands and how strong is still the Modi wave?