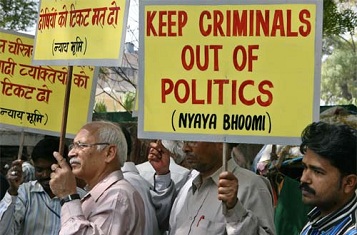 Chief Election Commissioner Sunil Arora has announced a reformative move to increase the transparency of the elections. The official said that the candidates in Maharashtra and Haryana polls will have to furbish their criminal related information in newspapers and broadcasts it over television.

Such information has to be made public on three occasions during the campaign period. Political parties have also been instructed to publish the details of such candidates. While speaking on the matter further, CEC Sunil Arora said: “A political party that sets up candidates with criminal antecedents is also required to publish information about the criminal background of its candidates, both in its website and also in newspapers and television channel on three occasions.”

The decision can be seen as an antidote to the increasing criminalization of Indian politics. Statistics report from Association of Democratic Reforms shows that nearly half of the newly-elected 17th Lok Sabha members have criminal charges against them. Out of the 539 winning candidates, around 233 MPs or 43 percent have criminal charges against them. This is a 26 percent increase as compared to 16th Lok Sabha. Around 29 percent of the cases are related to heinous crimes such as rape, murder, attempt to murder or crime against women.

In 2002, the Supreme court had made it obligatory for all candidates to file an affidavit before the returning officer. The affidavit needs to carry the information related to criminal cases pending against them.

RPA (Representation of People’ Act 1951) says that a legislator cannot contest the elections if he/she is convicted of any criminal offense. However, all those individuals under the trial were eligible for the polls. This practice was corrected by the Supreme Court in The Lily Thomas case (2013) verdict.

In 2018, the Supreme Court also directed the states to set up 12 special courts exclusively to try sitting MPs and MLAs. The orders were given to fast-track the pending cases against lawmakers and clean out the Indian politics from the evils of criminalization.

In Saturday’s announcement, Sunil Arora announced the dates of upcoming Maharashtra and Haryana polls. Along with it, date for by-polls in 18 states was announced. The by-polls will happen across 64 assembly seats.

Haryana Polls: Congress seeks suggestions from voters; promises to include them in election manifesto