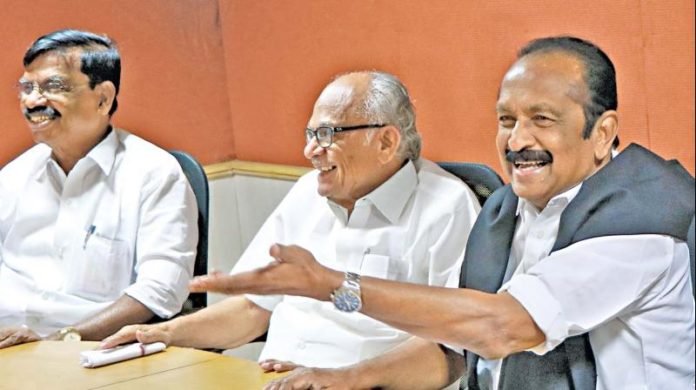 A Chennai Court on Friday sentenced one-year jail term to Marumalarchi Dravida Munnetra Kazhagam (MDMK) General Secretary Vaiko in connection with a case of 2009 for giving a seditious speech filed against him in 2009. The court also imposed a fine of Rs 10,000 on MDMK Chief Vaiko for his speech.

Talking to ANI after the verdict, MDMK General Secretary Vaiko said, “Yes I have said the same. I spoke my mind in a book released by Nedumaran. I spoke because Indian unity should not be split. It’s not against the country. I spoke about Tamil Tigers in Parliament too’, he said as quoted by ANI.

MDMK General Secretary Vaiko has been sentenced to a one year jail term and fined Rs 10,000 by a Chennai Court in a 2009 seditious speech case. (file pic) pic.twitter.com/O22qXdiDX7

Tamil Nadu Police had in 2009 booked Vaiko under IPC Section 124-A and 153 for his seditious speech in which he said that India would not remain united country if the war against the Liberation of Tigers of Tamil Eelam (LTTE) in Sri Lanka was not stopped.

Vaiko was one of the staunch supporters of LTTE and its chief Prabakaran. He was also among those who backed Prabhakaran’s idea of a separate homeland for Tamils and the Tamil Eelam.

The LTTE, an accused organization behind the assassination of Former PM Rajiv Gandhi, has been outlawed in India since 1992.

The development comes days after Vaiko was picked as a Rajya Sabha nominee from the party. The lone seat of was allocated to MDMK under the poll pact with even before the national polls.

Vaiko’s MDMK contested the national polls in an alliance with MK Stalin’s DMK. He was earlier associated DMK and was a member of the Upper House from DMK Quota from the year from 1978 to 1996.