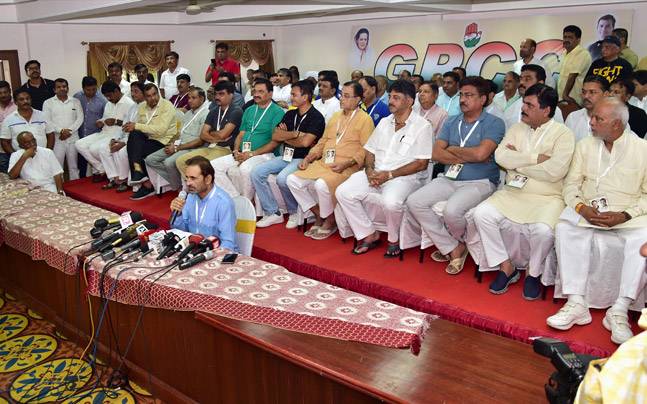 Throwing light on the current political scenario in India it is quite possible that soon India will become a one party nation, BJP-nation and fearing this Congress is desperate to keep its party united and intact.

Gujarat Congress has been facing a lot of challenge these days after Shakersinh Vaghela left the party, 6 more of its members quit the party to join BJP. Fearing of losing more of its members just ahead of the Gujarat Rajya Sabha polls due on 8 Aug, Congress took precautions and flew 49 of its MLAs to the party-ruled Bengaluru on Friday.

Congress has also accused BJP of luring away its MLAs by bribing them with a huge amount of money and tickets to contest the elections. National spokesperson of Congress and Gujarat MLA Shaktisinh Gohil claimed that BJP came up with an “irresistible offer” – Rs 15 crore to each MLA, a party ticket in Gujarat polls and funds to contest. “The BJP has resorted to low-level politics and is using the money, muscle and state machinery to win polls,” he said. He further added that the party members have unitedly decided to stand together with the party.

This statement of the party members come in unison for the support of Ahmed Patel who has been nominated by the party for Gujarat Rajya Sabha Polls. Gohil said that currently, Congress has the support of 57 MLAs, 10 extra for the victory of Ahmed, out of 182-member Gujarat assembly and it. The party confident about Ahmed’s win said that it will not let BJP murder the democracy in India.

Kaminiben B Rathore, MLA of Dahegam in Gandhinagar also accused BJP of offering her 15 crores to quit Congress and join BJP but she refused the offer.