The Indian Wire » Politics » Congress is a termite and should be finished totally: Modi in Himachal 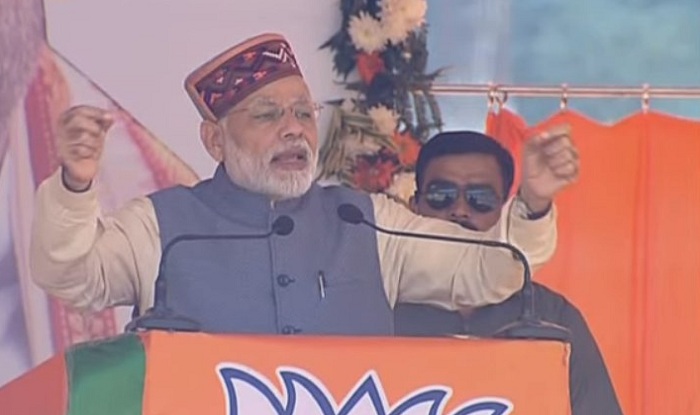 Attacking Congress in Himachal, Narendra Modi termed it as a termite which needs to be eradicated & urged to help BJP win by 3/4th majority.

Prime Minister Narendra Modi on the second day of his visit to the poll-bound Himachal Pradesh, addressing a rally in Kangra on Saturday said that the ruling Congress has lost the faith of its own leaders. He said that no senior Congress leaders are campaigning and the party has left the victory of Virbhadra Singh on the fate.

Addressing the gathering Modi said that right from Gaggal airport to the rally ground he has witnessed the same amount of people greeting him on both sides of the roads as many are present in the rally ground. “We have seen many elections but so much enthusiasm in people is unprecedented,” he said

Taking a dig at the ruling Congress in Himachal, Modi said that with only 4 days left for the elections in the state and usually in the last days of the polls the senior most leaders of any party are on their toes campaigning day and night, but it is surprising that no Congress senior leader can be seen in the state campaigning for the party. He further added that it seems like the Congress has left the battleground and have accepted their defeat in advance.

Slamming the Congress party and taking a jibe at Himachal Pradesh Chief Minister, Narendra Modi said that, at this phase of his life Congress has left Virbhadra Singh in the hands of the fate and nobody knows for what reason the party is taking revenge from the chief minister. He further added that not only these elections but for the coming many years Congress will not be visible in the state, just like it is not there in Bihar and Uttar Pradesh.

Addressing the gathering Modi said that, when the people extend their faith an support to a party they expect the same in return that the party works for the welfare of the public. But when the party tries to take advantage of the mandate of the people and misuses the power for personal gains, the very same people destroy the party with all their might.

The Prime Minister said that he was in the state two days back also, and now the situation is that he believes he does not have to ask anyone the direction of the flow of the winds. He boldly claimed that he can see the lotus blooming everywhere in Himachal and the victory of BJP is decided.

He alleged that the Congress party is sure that it cannot win the elections on its own and therefore they are finding rebels from other parties who can help them create some controversies and gain few votes.

Addressing the gathering Modi questioned that why today the entire world is singing the praise of India and said that it is not because of  Modi that the world is talking about the achievements of India but t is because of 125 crore Indians. He further added that it was because of these 125 crore Indians that BJP enjoyed a landslide victory after 30 years. He further added that it is because of the full majority that the BJP got in the 2014 polls that now the world is accepting the government of India seriously and is understanding the strength of our nation.

Once again attacking the opposition party, the Prime Minister said that until and unless the Congress is not punished and taught a lesson, the party amend itself. He added that Congress party is like a termite and if Himachal needs to be free of dirty diseases, the state needs to totally eradicate Congress party from Himachal.

Boasting about the achievements of his government, Modi pointed out the importance of electricity saying that it is indispensable. “Imagine how it must be for people who have never seen it in the 21st century. 15,000 villages have been electrified today,” he said. Modi questioned that the gathering “I’m fighting against corruption today and hence, have become a pain in their (Congress’) neck. People are bubbling with anger against the party. Should we fight or not fight against corruption? Shouldn’t the honest be rewarded?”

Also claiming that demonetization and GST is a success, the Prime Minister questioned the gathering that “They [opposition] are going to celebrate 8 Nov as black day & burn my effigies. They don’t know Modi is disciple of Sardar Patel & won’t be cowed down. Do you think they can scare me with the black day?” supporting the decision of not ban, Modi said that all those people who are hiding away the looted money are having a problem with demonetization. “Those who had to return their money to the banks will not let me live in peace I know,” Modi added.

Narendra Modi said that the condition in which the Congress is in today is all the result of its wrong doings. The party is reaping the fruit of its sins he said.

Talking about the schemes of the BJP government, Modi said that keeping in mind the welfare of all those ladies who were inhaling smoke equal to 400 cigarettes at a time while cooking on firewood, the government began with the Ujjwala Yojna. He said that the government has opened the coffins and decided to provide free gas connections to them.

Lauding the Pradhan Mantri Mudra Yojna, Modi said that “9 crore youth, mothers and sisters have been given money as a loan without any collateral to the banks under Mudra Yojana has led to the empowerment of the youth and honing their entrepreneurial skills.” Further boasting about his government, Modi said that the BJP government has made interview process for government jobs more transparent. “After coming to power, we eliminated procedure for the interview for class 3 & 4 jobs. Everyone agreed but the Congress ruled states denied,” he added.

Asking the people to vote for BJP, he said that if the party comes to power in Himachal Pradesh, it will develop, tourism, spiritual tourism, and infrastructure electricity in the state. “Give us an opportunity and we’ll serve Himachal Pradesh well,” says Modi batting for BJP.

Concluding the speech in Kangra, before heading for  Sundernagar, Modi said “There was maximum development in Himachal when Atal Ji was in Delhi & Dhumal Ji was here in Himachal. You have a chance again.”

The BJP candidate Prem Kumar Dhumal is very confident about the party’s victory in the assembly elections to be held on 9 Nov, whose results will be announced on 18 Dec along with the results of Gujarat polls.

Addressing the gathering in Sundernagar, Prime Minister Narendra Modi said that these assembly elections is not about forming a government in Himachal Pradesh but building a Bhavya’ & ‘Divya’ Himachal. Slashing down the Congress, Modi said that when Congress was in power the country used to talk about how much was there in the past, but now it discusses how much it will become in future. He also boldly added that the in the coming 100 years also, the people will not put their faith in Congress. Adding that his party will make sure to put an end to corruption and will find out all those who steal from the nation, Modi said that “The public has elected me in 2014 to fight against corruption.”

He also accused the Congress of misleading the people, as the party was scared of the future actions that Modi was going to take against the benami properties.

Appreciating the initiatives taken by the workers of his party, the Prime Minister said that party workers have made efforts to distribute 27 crores LED lights and made savings worth Rs 400 crore this year in Himachal. Speaking about the outlook of BJP if it comes to power, Modi said that “We want to change lives in villages in India be it roads, railways, air, highways. We want to work for Himachal.” He also assured the people that under the BJP rule, infrastructure and tourism will be developed in the state.

Modern infrastructure brings development. Himachal has much potential to expand it's tourism sector. We want to strengthen it further: PM

He also underlined that “We made generic medicines available in the medical stores so that everyone can afford it.” Further boasting about the initiatives taken by the BJP in Himachal, Modi said that the farmers were facing the problem of urea and the Neem coating of urea has benefitted farmers immensely.

Concluding his speech in Sundernagar, Modi said “Development will help us fulfill our dreams and will help us take our children on the correct path.”

The 68 constituencies in Himachal Pradesh will g t polls on 9 Nov and the results will be announced on 18 Dec along with the results of the Gujarat assembly polls to be held in two phases on 9 Dec and 14 Dec.