The Indian Wire » Politics » Modi in Myanmar : Countries sponsoring terrorism should be eradicated 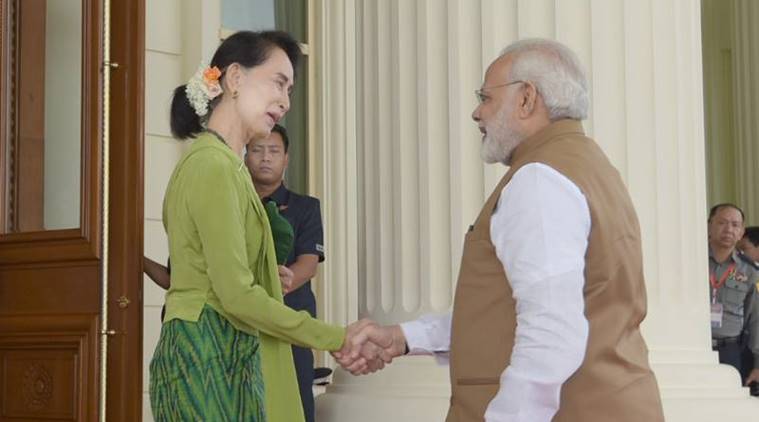 India & Myanmar agreed that terrorism remains one of the most significant threats to peace and stability & needs immediate action to curb it.

Prime Minister Narendra Modi headed to the second leg of his four-day journey to Myanmar on 6 Sep, after attending the BRICS Summit in China. This is the first bilateral meeting of the Indian Prime Minister to the country, he had earlier visited in 2014 to attend the ASEAN-India summit. The visit comes at a time when the nation is already facing difficulties the recent terrorist attacks in northern Rakhine State.

During the meeting held between Prime Minister Narendra Modi and State Counsellor Aung San Suu Kyi, both the leaders agreed to fight against the common problem of terrorism. While Myanmar condemned the recent terrorist attacks during the Amarnath Yatra in India, Modi also denounced the recent terrorist attacks in northern Rakhine. Modi expressing his grief said that “We share your concerns about extremist violence in Rakhine state and the violence against security forces and also how innocent lives have been affected. We hope that all stakeholders together can find a way out in which unity and territorial integrity of Myanmar is respected.”

Both the leaders jointly agreed that not just fighting terrorism is the need of the hour but strict actions should also be taken against those organisations and entities who give shelter and sponsor these terrorist activities. A joint statement issued by both the countries read that “Both sides agreed that terrorism violates human rights and there should, therefore, be no glorification of terrorists as martyrs.” They also called for the finalisation and adoption of strict actions against international terrorism by the United Nations. State Counsellor Aung San Suu Kyi said that “Together we will ensure that terror is not allowed to take roots on our soil or on the soil of neighbouring countries.”

During the meeting, the Indian Prime Minister announced that  India will grant a gratis visa to Myanmarese citizens wanting to visit the country. “I am pleased to announce that we have decided to grant gratis (no-cost) visa to all the citizens of Myanmar who want to visit India,” he said. He also said that India will release at least 40 Myanmarese citizens who are held in different jails in India.

Promoting the ideology of the Indian government led by Modi, he also added that India would contribute to Myanmar’s development efforts as part of our ‘Sabka Saath sabka Vikas’ initiative. He further added that India is willing to strengthen the relationship further with Myanmar in context of the Act East Policy.

Other than this 11 agreements were signed between the two nations regarding the maritime security, development in health and information technology and strengthening democratic institutions in Myanmar.

During his visit to the Country Narendra Modi also visited the famous early 12th-century Ananda Temple in Myanmar’s ancient city, Bagan. India is contributing in renovating the temple after it was damaged in a tremor last year.

With official no-fly-list; booking flights tickets to get more strict
As part of his nationwide tour, Amit Shah arrives in Odisha