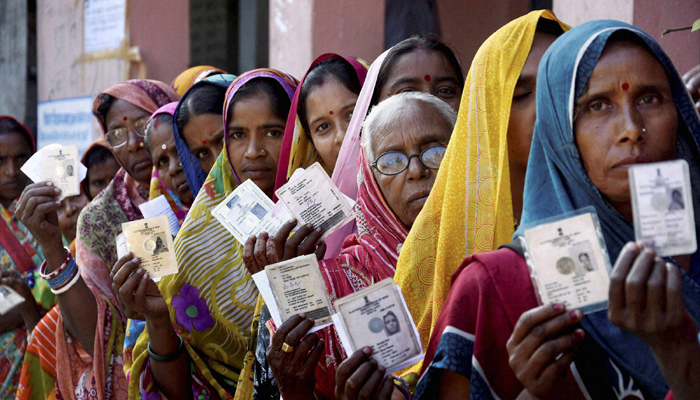 As Himachal Pradesh goes to polls today both the major political parties, BJP and Congress are holding on to their confidence of winning the elections. Though it is a trend in the hill state that no party forms a government consecutively for a second term, Congress despite anti-incumbency in the state is fielding high for a second term this time.

BJP also has not left any stone unturned, with the party’s firm determination of a Congress Mukt Bharat and colouring India saffron, the party has changed its policies by announcing the CM candidate this time.

As seen during the 12-day rigorous campaign, it can be said that both the parties are giving a tough fight to each other and the competition is really close. Congress is the ruling party in Himachal Pradesh under the leadership of Virbhadra Singh, who at 83 is contesting for the post for the seventh time. During his tenure, as he claims, Himachal has witnessed development, but it is for the first time that the issue of law and order is being raised in the otherwise peaceful state, which is definitely going against the Singh government.

The ‘Gudiya incident’ where a 14-year-old girl was gang raped and murdered, has raised the feeling of anger towards the ruling government and BJP has not missed the chance to take advantage of this.

While GST and demonetization were the main weapons of Congress during the campaigns, it was corruption and the deteriorating law and order conditions in the hill state for the BJP. Around 450 rallies were held by both the parties, where Prime Minister Narendra Modi along with other senior BJP members were the star campaigner for BJP and for Congress it was only Virbhadra Singh alone.

Narendra Modi and BJP Party President addressed around 13 rallies together, while several other BJP leaders including Uttar Pradesh Chief Minister Yogi Adityanath, Information and Broadcasting Minister Smriti Irani and a few others campaigned for BJP.

However, it was only incumbent Chief Minister Virbhdra Singh, who alone held around 90 rallies across the state. Congress Vice-President Rahul Gandhi only held three rallies and that also in a single day. On the lack of campaigning from the Congress side, Prime Minister Narendra Modi had also commented that it seems like Congress has already accepted its defeat and the party members have left Virbhadra Sinh alone in the hands of the fate.

Nearly 7,500 polling booths have been set up in the state and more than 50.25 lakh voters across 68 constituencies in Himachal Pradesh will cast their vote. A total of 338 candidates are contesting the polls of which  319 are male contenders and 19 are women. Congress has named incumbent Chief Minister Virbhadra Singh as the CM face who is contesting from the Arki Assembly seat. Breaking the tradition BJP announced its CM face in advance and named Prem Kumar Dhumal as the party’s candidate, he is fighting from Sujanpur constituency.

Looking at the previous results, it has been an alternate government of BJP and Congress in Himachal, but the 2017 results may change the pattern as both the parties are giving a tough competition. While the Congress has its upper hand in the biggest district of Kangra, BJP has its stronghold in the other two major regions of Mandi and Shimla districts. These three regions hold 33 of the total 68 seats.

In order to keep the law and order conditions under control and to conclude the voting peacefully, 37,605 polling personnel have been deputed for poll duty. Besides 17,850 personnel of police and Home Guards and 65 companies of central paramilitary force have been deployed. Other than this for ensuring free and fair polls and 29 general, three police, 22 Expenditure Observers and 71 Assistant Expenditure Observers, 1,561 Micro Observers, 193 Sector Magistrate and 789 Sectors officers have also been deployed throughout the state. Web-casting would be used in 2,307 polling stations in the state for live monitoring of polling activities in the state.

7,525 Electronic Voting Machines (EVMs) and Voter Verifiable Paper Audit Trail (VVPAT) are being used. VVPAT machines are being used for the first time in this Vidhan Sabha Election and 10 percent of total EVMs and VVPATs have been kept in reserve.

The results will be announced 40 days later on 18 Dec, along with the results of Gujarat assembly elections, which are to be held in two phases on 9 Dec and 14 Dec.