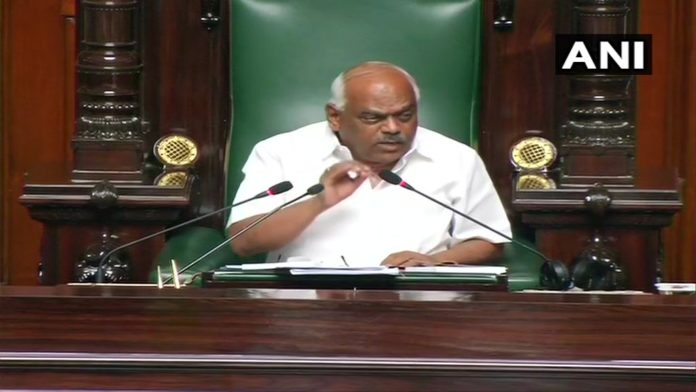 It seems like the ongoing political crisis in Karnataka is likely to end today, as the Karnataka Speaker KR Ramesh Kumar on Monday said that decision on the floor test will be taken today.

Responding to a BJP MLA who asked to conclude the Floor Test today, Assembly Speaker KR Ramesh Kumar said, ‘I have said on Friday itself, the decision on the floor will be taken today, You don’t have to repeat this’.

Speaking in the assembly, KR Ramesh Kumar said, ‘I will have to pass a ruling today. I was delayed as I was checking the Supreme Court order. In your speeches, today, make sure that the dignity of Assembly is kept alive. These are time stalling tactics being used. It harms the image of Assembly, Speaker and also the image of you as MLAs’.

Bharatiya Janata Party MLA Jagadish Shettar asked the speaker for setting up a time limit on debates on Trust Vote. Responding to BJP MLA, Assembly Speaker said that he is not setting up any but asked the treasury benches to consider the commitment that decision has to be taken today’.

Karnataka Speaker: In your speeches today, make sure that dignity of Assembly is kept alive. These are time stalling tactics being used. It harms the image of Assembly, Speaker and also image of you as MLAs. https://t.co/XXpeGrIwBL

READ: Karnataka Crisis: SC declines to give an urgent hearing on a plea by independent MLAs for the conclusion of Floor Test

While earlier in the day, Apex Court refused to give the urgent hearing to the plea filed by two Independent lawmakers seeking court directions to Karnataka Assembly to conclude the Floor Test by 5 pm today. The Top Court bench headed by Chief Justice Ranjan Gogoi said, ‘We can consider the plea taking up tomorrow, but now today’.

HD Kumaraswamy-led coalition government, on Friday, failed to meet the two deadlines set by the Governor Vajubhai Vala for the Chief Minister HD Kumaraswamy to prove the majority in the House. Following which the floor test was scheduled for Monday.