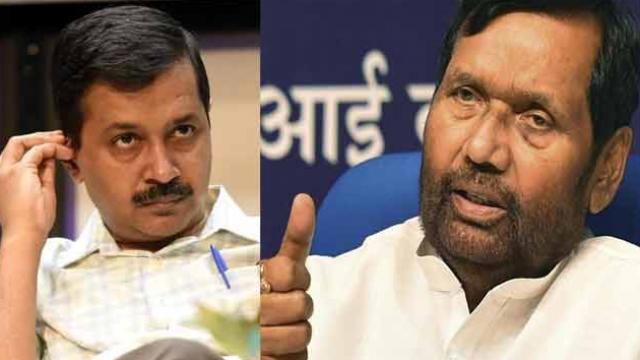 Delhi Chief Minister has accused the Consumer Affairs Minister Ram Vilas Paswan of lying and misleading people with regard to the water samples collected by the Bureau of Indian Standards (BIS) from the national capital. The Aam Aadmi party has claimed that no water samples have been collected from people so far.

Leading the attack, CM Kejriwal retweeted a news clip, in which a person, whose address featured in the list of places from where the BIS collected the water samples, were seen telling the media that there was no issue with the quality of drinking water and no sample was taken from his house.

Chief Minister Arvind Kejriwal, citing media reports, tagged the union minister on twitter and said, “Sir, you say that you took a sample of water from them (citizens quoted in the news report) and that sample failed, while they say that you did not take any sample from them. They also say that they are satisfied with water. You lied so big? Being a Union Minister, such a big fraud with the people? ”

In another tweet, AAP said, “Sample 1 says he did NOT file any water quality-related complaint ever, while Sample 3 is from Ram Vilas Paswan’s own home which is supplied by the Central government’s own CPWD and Sample 7 turns out to be an office-bearer of Mr. Paswan’s own party.”

Sample 1: says he did NOT file any water quality-related complaint ever

Sample 3: is from @irvpaswan own home which is supplied by the Central govt's own CPWD

Either the samples were taken from politically motivated people or weren't taken at all. @irvpaswan will you apologize to Delhi for this fake report?#BJPLiesExposed https://t.co/ZTGDgo2OQa

The Aam Aadmi party has demanded an apology from the Bharatiya Janata Party and resignation of the union minister for the ‘fake’ report. They further stated that either the samples were taken from politically motivated people or weren’t taken at all.