Ghosh, a long time Rashtriya Swayamsevak Sangh (RSS) pracharak (volunteer), was unanimously re-elected to the post. He had taken over as the state party chief in December, 2015.

He was sent to the BJP in 2014. Prior to heading the Bengal unit, he was a general secretary in the party. 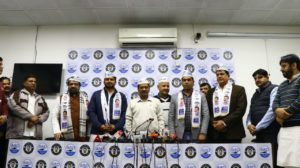