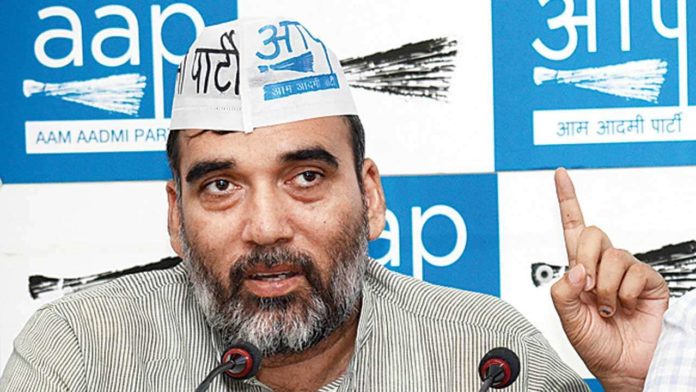 The Poll Commission on Sunday filed a Police case against AAP Senior Leader Gopal Rai for violating the model code of conduct by distributing pamphlets without the permission. The action against the Delhi Minister came following the complaint by the EC Flying Squad who accused Rai of flouting the Poll Code.

Deputy Commission of Police, Madhu Verma speaking to media said, that a case has been filed on the complaint of the EC Flying Squad against the AAP leader Gopal Rai at Connaught Place Police Station.

However, the complaint against Gopal Rai has irked the Delhi ruling AAP who accused the Poll Commission of not acting against Bharatiya Janata Party.

In a statement released by the party, It stated that ‘We wish someday a flying squad suo moto register cases against BJP leaders too. Till now all cases have been registered after a lot of follow-ups with EC, EC has not yet taken a call on multiple violations by Gautam Gambhir. We again demand Gautam Gambhir to be banned from campaigning for 72 hours.’, reported News18.

Earlier, on Sunday, Atishi, Aam Aadmi Party nominee from Delhi East Lok Sabha Seat wrote a letter to the returning officer regarding repeated violation of the model code of conduct by BJPCandidate Gautam Gambhir. She, in a page letter, said that Cricketer-turned-Politician had on April 28 held a rally without permission from Poll Commission.

AAP in a run-up to the national elections in banking on the issue of ‘full statehood to Delhi’ and asking voters to elect all 7 MPs from AAP.