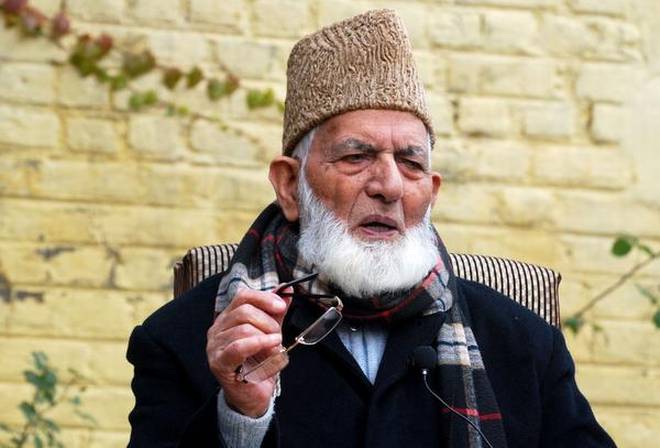 The ED(Enforcement Directorate)on Friday has imposed a penalty of Rs 14.40 lakh on Separatist leader and Hurriyat Conference (G) Chairman Syed Ali Geelani for being in the possession of US $10,000.

A local daily claimed that the case was 17 years old.

The case was filed under Foreign Exchange Management Act(FEMA), an Official said.

Under the Foreign Exchange Management Act(FEMA), foreign exchange dealings are regulated in India and acquisition and possession of foreign exchange by resident Indians are required to be conducted in accordance with the general or special permission.

In 2017, the probe agency had summoned the 87 year old Syeeda Ali Geelani.

The ED took up the case after taking cognisance of Income Tax report and also issued summons to Geelani to appear before it in Srinagar.

As per the report in the GreaterKashmir, the agency earlier said,”Geelani did not have any such permission or bona fide explanation for acquisition and possession of the foreign currency. Therefore, he has been asked to show cause to the adjudicating officer under FEMA within 30 days as to why the recovered currency should not be confiscated and penalty imposed on him.”

Apart from separatists leaders, the ED has hammered on the alleged terror financing accused.

In its dossier, the ED has stated that the investigation against global terrorist Hafiz Mohammad Sayed and others were conducted under PMLA on the basis of charge-sheet filed by the NIA(National Investigation Agency).

A report in NDTV said that the document by ED read, “More than 25 properties in the name of associates of Hafiz Sayed have been identified and one property located at Gurgaon having a registered value of Rs. 1.03 Crores has already been attached under Section 5 of PMLA on 11.03.2019. Further investigation is in progress.”