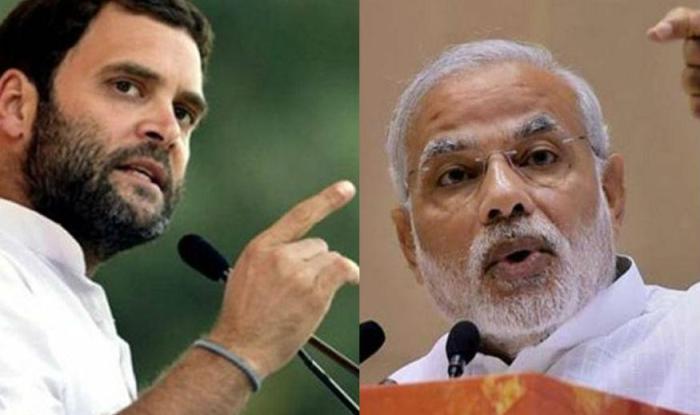 The poll-bound states of Rajasthan and Madhya Pradesh will be in political fervor today as PM Modi is set to address a rally in Ajmer in Rajasthan while Congress President Rahul Gandhi will be in Madhya Pradesh. Both the parties, ruling Bharatiya Janata Party (BJP) and opposition Congress are making efforts to woo the voters for upcoming state assembly polls.

PM Modi along with BJP president and his close aid Amit Shah will address a rally in Rajasthan’s Ajmer which will also see the culmination of Chief Minister Vasundhara Raje‘s state-wide ‘Rajasthan Gaurav Yatra’ which she had begun from Rajsamand’s Charbhujanath temple, ahead of assembly elections in the state.

BJP had recently lost two seats in the bypoll to Lok Sabha seat, and one of them was from Ajmer district. But the party has a strong presence in state assembly as 7 out of 8 assembly constituencies are represented by BJP MLAs while the Congress has one seat of Nasirabad.

Still, the recent loss to by-poll seat has made BJP cautious and is trying to build a favorable atmosphere and mood among the voters by holding the rally of Modi, who had addressed an election rally in Ajmer in 2013 also.

This is the fifth visit of PM Modi in the state ahead of the assembly elections. Congress state chief Sachin Pilot had said that Modiji is coming to Ajmer, but he remembers the city only at the time of elections. He visits Ajmer to seek votes. He had also accused CM Raje to have indeed misled the prime minister on development in Ajmer.

While Rahul Gandhi, in his third visit to the Madhya Pradesh will hold rallies in Morena and Jabalpur and also attend an event organised by a tribal organisation after which he will address a public meeting. The public meeting is organized by the Adivasi Ekta Parishad at the Ambedkar Stadium in Morena.

Lately Rahul Gandhi has been branded as Shiv Bhakt after he went to Kailash Yatra in September. Soon after, he came to Bhopal to kick-start the poll campaign ahead of assembly elections.

Last month itself he also visited Kamtanath temple in Chitrakoot, wherein his posters referred to him as “Rambhakt Pandit Rahul Gandhi” showing him with folded hands before a picture of Rama. It is said that Rama had spent 12 years of exile in Chitrakoot.

Following the suit, on this visit too Rahul Gandhi will perform “Narmada puja” at the Gwari Ghat in Jabalpur and begin a roadshow from the Bandria Tiraha (tri-section) to the Abdul Hameed Tiraha.

The roadshow will be 8 km long and posters, banners have been put up. The party president will also address a public meeting at the Raddi Chowk in the city.

The Assembly polls in the state, where the Bharatiya Janata Party (BJP) is in power since 2003, are due by the year-end.