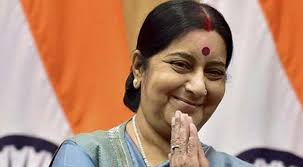 External Affairs Minister Sushma Swaraj was on a two day visit to Russia to discuss issues of bilateral cooperation of the two nations. The meeting was held in the capital city of Moscow from 13-14 September.

The 23rd India-Russia Inter-Governmental Commission on Technical & Economic Cooperation (IRIGC-TEC) was chaired by the Yuri Borisov, Deputy Prime Minister of the Russian Federation and Sushma Swaraj, Minister of External Affairs. IRIGC-TC is standing body which conducts annual meeting to review the ongoing activities in areas of trade and investment, culture, science and technology. She also reviewed bilateral cooperation in various fields which would provide means of directions on the interest of both the countries.

Sushma Swaraj’s meeting comes ahead of Russian President Vladimir Putin upcoming visit to India this year. It is said that Swaraj discussed the India- Russia Annual summit which will be conducted in the month of October. The two leaders had last met in Sochi for in informal submit on May 21, 2018.

This will be the 19th Indo- Russian summit with Prime Minister Narendra Modi on October 5. The India-Russia summits are the highest level of official exchange between the two countries which is hosted alternately in the two countries. The last summit was held in St. Petersburg in 2017.

Ever since President Putin attended the inaugural summit in New Delhi in October 2000 with Prime Minister Vajpayee, strategic ties between the two countries have been elevated to a ‘Special and Privileged Strategic Relationship’.