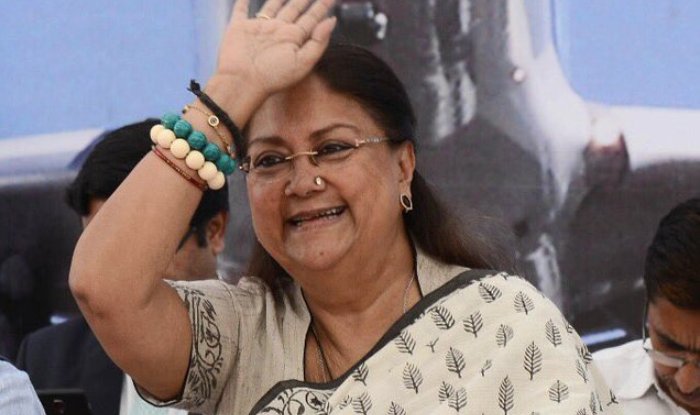 Two time Chief Minister and member of the Bharatiya Janata Party (BJP), Vasundhara Raje has been on the receiving end of criticisms, from the opposition and certain communities in Rajasthan, for the failure of her government to appropriate effective governance to the people of the state. Ashok Gehlot, the former Chief Minister and senior member of the Indian National Congress, said that the BJP government in Rajasthan failed to fulfill its tall promises as a result of having a non-performing CM in Raje. Gehlot has been a vocal critic of the Raje government which he says is full of ‘corruption and nepotism’, while questioning its achievements in the last 5 years. Here are some of the failures of Chief Minister Vasundhara Raje’s government in Rajasthan:

1. Shutting down of Major projects

The Congress government, in 2013, signed a MoU with HPCL to set up a 9 million tonne, a refinery-cum-petrochemicals project with an investment of Rs. 37,000 crores. The Raje government, however, junked the MoU and put the project under review in 2014. The terms and conditions have been renegotiated with HPCL, according to the BJP, unlike the old MoU which had a less share for the state and an interest-free loan package.

The foundational stone was re-laid by Prime Minister Narendra Modi in January 2018. People have been criticising the government for laying the foundation for the same project twice, although many see it as a positive sign.

According to political analysts, the oil refinery in Barmer is not the first project to be hanging at the mercy of changing governments, but Barmer itself has been facing instances of neglect.

Another example of such an instance is that of the Barmer Life Canal Project. The foundation stone was laid down by the Congress in 2003, claiming that the project would be finished in 3 years. However, Raje’s government put the project on hold, when her government came into power the same year. A foundation stone was re-laid in 2007 by Vasundhara Raje, accusing the Ashok Gehlot government of not making budgetary allocations.

At the 2016-17 Budget Speech, the Comptroller and Auditor General Report stated that nearly a dozen government departments in Rajasthan failed to act promptly on the ambitious initiatives of Chief Minister Vasundhara Raje.

The Rajasthan Legislative Assembly report revealed that no expenditure was incurred by at least seven departments on major project and policy initiatives announced by the CM in the year 2016-17. The reported stated ‘a slow pace in follow-up action and laxity in starting the works is indicative of the lack of monitoring and pursuance of initiatives announced by the Chief Minister during the budget speech’.

As per the CAG report, the ‘Rajasthan Startup Policy 2015‘ implemented in the state, which sought to provide financial assistance to young entrepreneurs to start their enterprises, incurred no expenditures.

The Public Health & Engineering Department and the Water Resources Department observed a slow pace of follow-up action by the government, as well.

According to the report, 877 outstanding cases of misappropriation, theft and losses in government money under various departments amounting to Rs. 67.02 crores, were observed.

3. The privatization of Health Sector

The government of Rajasthan under the Chief Minister, Vasundhara Raje, initiated the ‘Bhamashah Swasthya Bima Yojana’ (BSBY) as an ambitious flagship scheme which relies heavily on private enterprises to deliver healthcare services. This scheme is seen by the state as an effective solution to counter Out of Pocket Expenditures (OPE).

The state must increase the budget to strengthen institutions that deliver health care, rather than diverting funds to insurance and relying on private providers. OPEs could further be reduced if the state also provided the services.

While it has been proven that health insurance schemes may increase chances of treatment, they do little in terms of reducing OPEs. Excessive emphasis on health insurance would only increase the burden of health expenditure on the state without yielding substantial results. Importance should be given to focusing on expanding free medicine, free diagnostics and other similar schemes which guarantee people free treatment without any discrimination.

The major issue of concern is the failure on part of the government in strengthening public health infrastructure to cater to the increasing load of patients and improving the quality of healthcare services.

While the patient load has increased manifold across all tiers of the healthcare service delivery system, the pressure has been felt the most at the tertiary health care level. This is because the primary and secondary healthcare facilities still remain largely under-utilized and being ill-equipped in terms of human resources and other infrastructures.

4. Failure to Provide Employment to Youth

Chief Minister Vasundhara Raje’s government in Rajasthan is lagging behind in terms of its promise to offer jobs to the youth. The government, which has made it a budgetary promise to fill more than 1.4 lakh posts before December 2018, is way behind its target because of extremely poor implementation affecting its goal.

Around 77,100 posts out of 1,40,000 posts remain vacant in the educational department alone; about 18000 posts in the police department, 11,930 posts in administrative reforms, and 6,758 posts in the health department remain vacant. The posts were to be filled via the appointment of the Rajasthan Public Service Department and the Rajasthan Subordinate Ministerial Staff Service Commission. The state government even increased the upper limit of age eligibility for government jobs from 35 years to 40 years.

Furthermore, the private sector has not responded to the Raje government’s budget proposal that provided for an employment subsidy of Rs. 5,000 to the bonafide citizens of Rajasthan. The subsidy increased from Rs. 5,000 to Rs. 45,000 for employment to bonafide residents by the established enterprise in backward regions.

A skill training program was announced by the Chief Minister in order to better prepare the youth for jobs, under which Rs. 15 crores were allotted for entrepreneurship development. The program didn’t, however, have any significant takers.

The BJP manifesto promised over 15 lakh jobs to youth, in 5 years, but has not managed to provide even one lakh jobs in 4 years. The Rajasthan Congress Chief, Sachin Pilot said, “The BJP government is deceiving the youth by giving a misleading figure relating to employment in the past 4 years. The claims of providing over three lakh jobs are misleading. Only 89,000 jobs have been provided against the promised magic figure of 15 lakhs. The government should come out with a white paper on this issue as the claims are false.”

5. Failure to set up POCSO Courts

The Vasundhara Raje government was blasted by the Rajasthan High Court for failing to set up an adequate number of POCSO (Protection Of Children against Sexual Offences) courts. The petition was filed by the Rajasthan State Legal Service Tribunal and was passed by a bench of Justices Manish Bhandari and Dinesh Chandra Somani.

The Rajasthan High Court expressed anguish at the state government’s inability to allocate a budget for setting up of POCSO courts, and at its failure to understand the importance of the POCSO Act, as well as its non-adherence to the allocated time frame for setting up these special courts.

The High Court further stated that the state Chief Secretary, D.B. Gupta, had assured the opening of seven to eight new POCSO courts but cited the ‘government machinery failing miserably in allocating funds’ for the same even as the tenure of the Raje government in Rajasthan was coming to an end.

Currently, the state of Rajasthan has only one POCSO court.