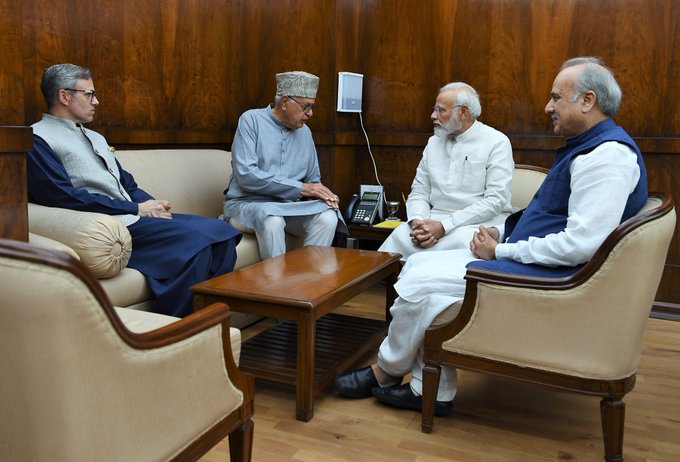 National Conference (NC) Chief Farooq Abdullah and party’s working President Omar Abdullah on Thursday called on Prime Minister Narendra Modi in the national capital. Both the former Chief Ministers of Jammu and Kashmir requested PM Modi to hold Assembly polls in the valley by the end of the year.

National Conference leaders also requested him not to take any political step that led to a disruption in the environment of the state. The meeting comes at a time when there are speculations the Centre could be preparing to take even more strong steps after it deployed 10,000 paramilitary forces to the valley.

It should be noted that BJP working President JP Nadda had early this week held a meeting with party state core group and seek inputs about the current political situation of the state.

Speaking to media after meeting the Prime Minister, former Jammu and Kashmir CM Omar Abdullah said, ‘We have informed him about the present situation of the state, and urged him not to take any political or legal step that could disturb the state’s atmosphere’.

Abdullah further added lakhs of tourist are present in the state because of the Amarnath Yatra, we do not want that it should get disturbed’.

He further told the media that he has also raised the issue to hold state polls in the valley as soon as possible. He said that it has been over 1.5 years since an elected government has governed the state.

‘I requested him to hold the Assembly polls in the state as soon as possible, or by year-end, and the people should be given a chance to make a decision; added National Conference working President.

In a series of tweets, Abdullah said, ‘I accompanied @JKNC_ President Dr Farooq Abdullah Sb & Hon MP Justice Masoodi Sb to a meeting with Hon @PMOIndia this morning. During the course of the meeting we briefed Modi Sb about our assessment of the current situation in the state’.

He added, ‘Dr Abdullah Sb reminded the Hon PM that J&K has been without an elected government for well over a year now and requested him to take all necessary steps to facilitate the @ECISVEEP’s conduct of assembly polls before the onset of winter’.

Dr Abdullah Sb reminded the Hon PM that J&K has been without an elected government for well over a year now and requested him to take all necessary steps to facilitate the @ECISVEEP’s conduct of assembly polls before the onset of winter.

In the meantime, the poll commission has already announced that it will declare the election schedule for the state polls in Jammu and Kashmir after the conclusion of Amarnath Yatra.

While early this month, the Central government had extended the president’s rule in the valley for another six months from July 2.

The Political Crisis in the State occurred in June last year when Mehbooba Mufti-led Coalition Government was reduced to a minority in 87-member assembly after the withdrawal of support by 25 Bharatiya Janata Party’s Lawmakers in the state.

Governor Satya Pal Malik had in November last year dissolved the Jammu and Kashmir Assembly citing reports of Horse-Trading. Earlier, President Rule was implemented in the valley on December 20 after the end of 6 months of governor’s rule.