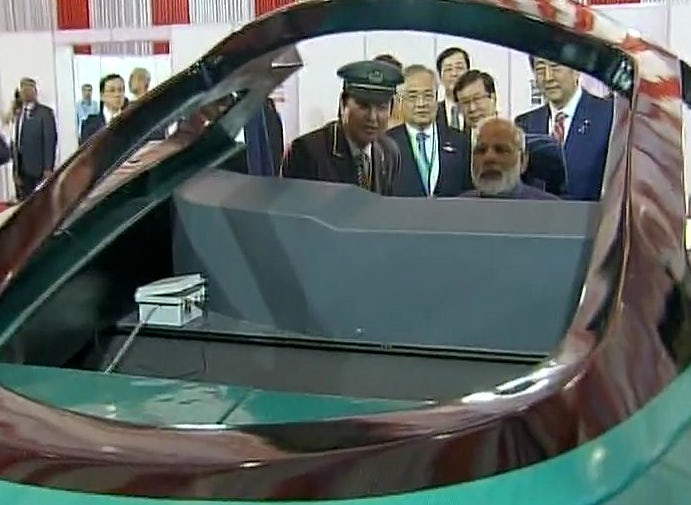 The long awaited dream project of Narendra Modi to make India a high tech nation is finally being accomplished with the help Japan. The project is likely to be completed by 2022, the year by which Modi hopes to make a new India.

A 21-km-long tunnel will be dug between Boisar and BKC in Mumbai, seven km of which will be under the sea. The train will run at an average speed of 320 km per hour and at a maximum speed of 350 km per hour. Enroute it will stop at 12 stations for 165 seconds each. The train will be designed to have two seats, executive, and economy with the prices based on the prices of the AC 2 fare of Rajdhani Express.

During the launch, Modi thanked his Japanese counterpart for the big gift of bullet trains to India. He also appreciated Japanese Prime Minister’s personal interest in the project and making it a reality. He said that India has found a friend who is willing to give loans without interest. Modi further emphasised on the Indo-Japanese friendship and relationship from withstanding the test of time.

Shinzo Abe said that nothing is impossible to achieve if stood and worked hard for the dream together. He said that “I really like Gujarat & I really like India. I will do whatever I can for India.”

Following the inauguration of the bullet train project both the leaders headed for the 12 India Japan Summit. Narendra Modi along with Shinzo Abe signed a few agreements further strengthening the bilateral ties between India and Japan.

In a joint press statement, 3 sets of documents were exchanged between the two countries. In the first document, four notes were discussed and finalised which stated the construction of Mumbai-Ahmedabad High-speed rail and the construction of international cooperation and convention center in Varanasi.

The third document contained the agreement signed between Union Home Ministry and the Japanese government for cooperation and collaboration in the field of disaster risk management. It was also agreed between both the nations that they will share the experience, knowledge, methods, and policies to prevent natural disasters.

To enhance the northeastern region in India and to establish an efficient and effective plan for the development of that region, another agreement was signed for an India Japan Act East Forum. An agreement was also signed between the Department of Industrial Policy and Promotion and Japan’s Ministry of Economy, Trade, and Industry to provide better facilities and accelerate Japanese investment in India.
Both the countries also agreed to a Cool EMS service under which food can be sent from Japan to India in cool boxes for Japanese expatriates in India.