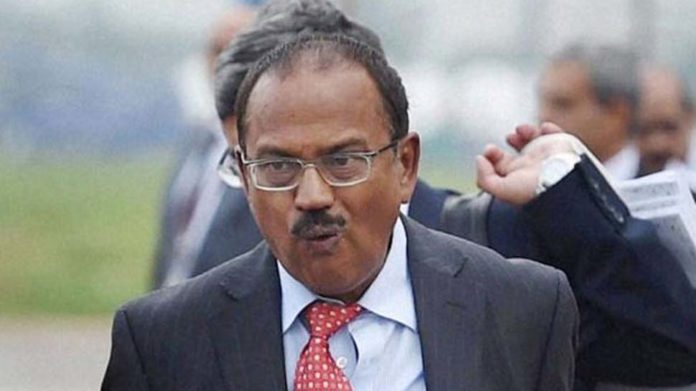 National Security Advisor (NSA) Ajit Doval is likely to visit Jammu and Kashmir on Monday after the Union Government announced to scrap the Article 370. Doval along with other officials will fly to the Jammu and Kashmir to review the situation on grounds.

Doval, who has been given a cabinet rank in Narendra Modi second term, had in July visited the valley before the implementation of the decision to scrap the Article 370, that gives special status to Jammu and Kashmir.

Earlier in the day, Union Home Minister Amit Shah tabled a resolution to this effect in Rajya Sabha following which President Ram Nath Kovind issued a notification – The Constitution (Application to Jammu and Kashmir) Order, 2019, that will come into force immediately.

The government has replaced the 1954 presidential order with the newly published Presidential order, 2019. 1954 order was called on to inculcate 35A under Article 370. Article 35A lets Jammu and Kashmir define its residents and make special provisions for them.

In the meantime, Opposition created uproar in the Rajya Sabha with many leaders opposing the scrapping of Article 370. Speaking at the Parliament complex, Congress Senior leader Ghulam Nabi Azad slammed the government.

He as quoted by ANI, said, ‘A border state, which is culturally, geographically, historically and politically different was bound together by Article 370. Drunk in power and to get votes, BJP government scrapped 3-4 things. They’ve cut off head of the country. Political parties will fight and stand with Jammu and Kashmir.

GN Azad,Congress: A border state, which is culturally, geographically, historically&politically different was bound together by Article 370. Drunk in power&to get votes, BJP govt scrapped 3-4 things. They've cut off head of the country. Political parties will fight&stand with J&K pic.twitter.com/UCV6WGqD22