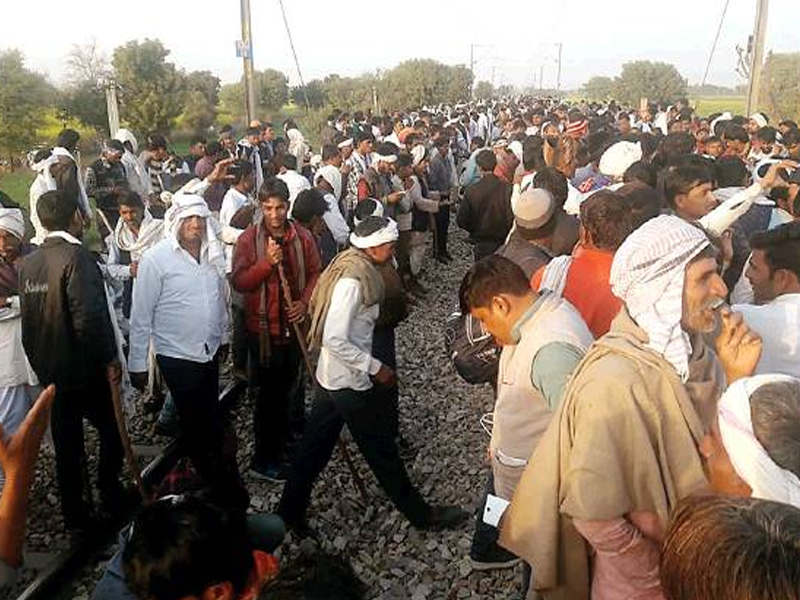 The stir that erupted following the protest by Gujjar Community continued on the second day, as the members of the Gurjar Community in Rajasthan continued to block railway tracks demanding the implementation of the 5 percent reservation that was promised to them by the Rajasthan government.

Agitating Gujjars sat on railway tracks at Malarna Doongar near Sawai Madhopur, leading to the cancellation of 14 trains and the re-routing of several/

#UPDATE: 4 trains diverted and 14 cancelled between Sawai Madhopur to Bayana section-Nimoda to Malarna block section in Kota Division of Western Central Railway due to the ongoing reservation movement by the members of Gujjar community in Rajasthan.

The agitation comes nearly a month after 10 percent quota for the economically weaker sections in the general category in jobs and education was cleared by parliament. The move was introduced as a constitutional amendment, passed in parliament and enacted in a matter of days.

As quoted by news wire ANI, an agitation member said, ‘We have a good chief minister (Ashok Gehlot) and a good prime minister (Narendra Modi). We want that they listen to the demands of the Gujjar community. It isn’t an tough task for them to provide reservation.”

The Gujjars say if 10 percent reservation for the economically backward can be passed, then why not for them, they added.

The State Government had assured the Gujjar community of 5 percent reservation in a special category in 2017 after a bout of agitation.

It had planned to expand the reservation for Other Backward Classes from 21 per cent to 26 per cent and give 5 per cent reservation to Gujjars and other castes. After the expansion, the total reservation in the state would have crossed the 50 per cent ceiling set by the Supreme Court.

The then BJP Government in 2017 passed the bill to raise the reservation for the OBC by five percent now making it to 26% from 21% with a voice vote. However, the Bill introduced by the Rajasthan government was challenged by the opposition and would also be taken to court. After which, Rajasthan High Court put a stay.