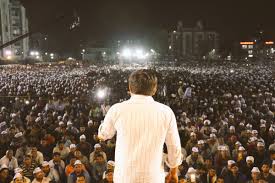 NEW DELHI: Though Hardik Patel was able to draw huge crowds at his rallies, often larger than Prime Minister Narendra Modi, the Patidar couldn’t help the Congress party snatch power from the BJP in Gujarat, as declared by exit-polls on Thursday.

Congress with the help of young gun of Gujarat was looking to create a political space for itself in Prime Minister Narendra Modi’s home state by trying to win Patidars voters.

Hardik, who has emerged as the face of the Patidar agitation, assured his support the Congress party as he urged people not to vote for BJP. In return, Congress promised quota in its election manifesto to Patidars, who had been demanding reservation from last two years.

Patidars constitute 14 percent of Gujarat’s population. With Hardik Hardik Patel, on his side, Congress was eyeing at scoring big in constituencies dominated by the Patidar community.

To amass the support of various communities, the Congress had invited Patel, Thakor community leader Alpesh Thakor, and Dalit leader Jignesh Mevani to join hands with the party to defeat the ruling BJP.

However, the Hardik-Congress tie-up seems to have failed in yielding positive results as the exit polls by various media houses unanimously predicted a BJP victory in Gujarat.

Almost all exit polls predicted more than 100 seats for the BJP in Gujarat where the party has been entrenched in power for close to two decades now.

The ABP-CSDS exit poll by ABP News predicted a BJP victory in 117 seats as against the Congress’s 64.

Today’s Chanakya gave BJP 135 seats in Gujarat and predicted a measly 47 for the Congress.

The News Nation exit polls gave the BJP as many as 124-128 seats and the Congress between 52 to 56 seats and 1-3 for others. The Times Now-VMR Exit poll predicted 113 seats for the BJP and 66 for the Congress, with the remaining going to others.