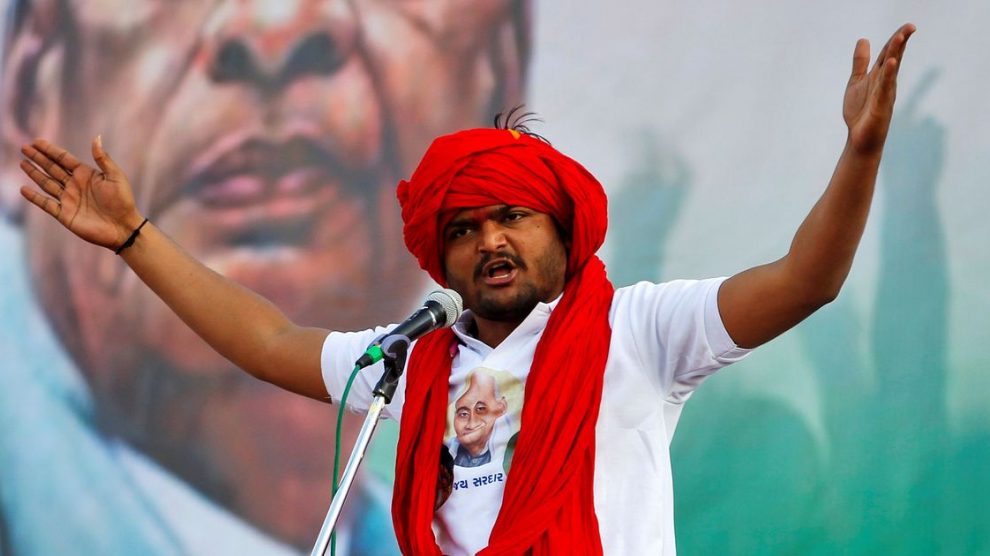 Hardik Patel said that after defeat, he would now launch a campaign for removing communal distrust, getting freedom from EVMs & reservation.

The Patidar agitation spearheads Hardik Patel leading the community demanding for reservation under the OBC quota will soon be revitalizing his campaign against BJP after the defeat of Congress in the assembly elections. The Patidar leader, during the election campaign, had said that he would support the party who fulfills the demand of reservation to Patidars under the OBC category. Congress desperate to get the support of the party, who was traditionally the vote bank of BJP, suggested some option that would grant quota to the Patidars. After much meetings and discussion, Hardik had finally extended his support to the Congress.

Apart from Congress President Rahul Gandhi, Hardik was another prominent star campaigner for the Congress, and he also got a huge response from the people. Sometimes the number of people present at his rallies even outnumbered Prime Minister Narendra Modi‘s gatherings. Hardik had openly declared a war against the BJP and had sworn to fight and pull down BJP and its 22 years old rule in Gujarat, and so he did throughout the election campaigns. But the results were otherwise, as Congress did not win the polls, and the BJP and Hardik Patel do not go along well together.

Nonetheless, the results have not changed the Patidar leader’s fight for reservation and he is ready with a post-poll campaign. During a conversation with the press after the Gujarat verdict, he said that he would launch a campaign for removing communal distrust and getting freedom from electronic voting machines. He believes that the BJP won the elections because the party tampered the EVM machines. Regarding the aim of removing communal distrust, Patel alleged that BJP divided the people on the bases of communities and he will make sure that the people do not fall into BJP’s trap of communal diving.

In his statement to the press, Hardik said that “Before the election, we kept the focus so much on issues related to governance and democratic rights that the BJP found it difficult to build its usual Hindu versus Muslim narrative in the state. Now I will spend time in cities and villages and hold meetings to tell people they must unite against attempts to divide the society on communal lines.”

He also blamed especially Prime Minister Narendra Modi, for dividing the state and playing communal rhetoric during the election campaign. Urging the people to unite against BJP he added that ““It is now the responsibility of the people of Gujarat, especially the majority Hindus, to reach out to Muslims. Modi and his men divide us and we will unite our people.”

The Patidar leader has also vowed to expose the dirty politics played by the BJP to win the elections. He said that the party won by tampering EVMs and using money power. “Ensuring freedom from EVMs is as important as removing communal distrust. Both are necessary to prevent the subversion of our democracy. There are doubts about the reliability of EVMs, and this is not good for any country. If something is not done quickly to remove these doubts, our protest will move to the streets,” he said

Hardik also said that the Patidar Anamat Andolan Samiti will soon recommence its demand for job reservation for the Patidars. Similar demands of reservation are being made by other communities also in different states. Jats, Gurjars, Marathas and a few others are demanding the same and the government has been denying it for quite some time now. Though as the Lok Sabha elections are nearing, Narendra Modi is well in advance preparing to fight these reservation criteria without really disappointing any community. The Prime Minister has already appointed a committee to sub-categorize the Other Backward Classes and the process will most probably be completed by Feb 2018. Sub-categorisation of the OBC will split the Other Backward Classes into three categories. After the categorization, each of the sub categories will then be given a 27% of reservation of government jobs and seats in educational institutes reserved for the socially and educationally backward classes. This move of Modi will definitely keep all the castes to his court without actually disappointing anyone.

However, Hardik seems to be adamant on his demand and since now Congress is not forming the government in Gujarat, the Patidar leader will have to continue with its stir against BJP. To further strengthen his movement senior Patidar leader Gordhan Zadafia has established his contacts with the wider net of communities, including Kurmi Kshatriyas, Gurjars, Jats, Mohantis, Kappas and Kapus. This had certainly given a momentum to the agitation and has provided a wider platform to the Patel for his protest.

With all the plans set for post-poll campaigning and the Patidar leader clear with his goals, he also said that for the time being at least he is not interested in entering into politics and would think about it when the 2019 Lok Sabha elections are around the corner. “The Congress has been raising people’s issues and I will keep supporting it so long as it continues to raise such issues. But joining politics is something I will decide two years later.” Hardik also did not give any clear indication as to whether he would be joining Congress or form his own party.