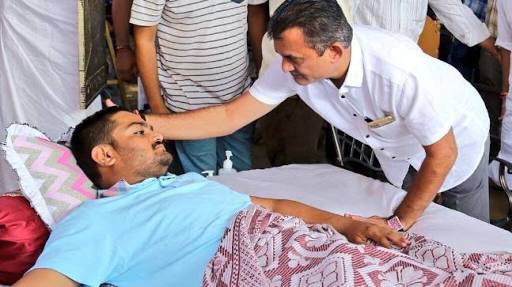 Patidar Anamat Andolan Samiti (PAAS) leader Hardik Patel began an indefinite hunger strike on August 25. On his ninth day of the strike, Patel released his legal will and mentioned his desire to donate his eyes if he dies during his fast-unto-death.

His agitation is against the BJP government in Gujarat. He was denied staging the protest at a public place, so Patel has been on a hunger strike at his residence in Gujarat. His main demands include reservations for the Patidar community in government jobs and educational institutes, farm loan waivers and the release of his aide Alpesh Kathiria, Times of India reported.

Delhi Chief Minister Arvind Kejriwal on Monday came to Patel’s aid and said that farm loans must be waived off. His tweeted, “The farm loan of the farmers must be waived off. Hardik Patel is fighting for the cause of farmers. Entire farmer and society is with him. His hard work would not go in vain. Let God give him strength.”

Patel’s will was made public by PAAS leader Manoj Panara who informed that the former’s health was deteriorating rapidly. “It is possible that in the next 24 to 48 hours, he might not be able to in a position to speak or walk. So, he has timely declared his will,” he was quoted as saying by The Indian Express.

As per his will, Patel has Rs 50,000 in his bank account. His will states that out of Rs 50,000, Rs 20,000 from it to will be received by his parents and the rest as a donation to a cattle shelter in his native Viramgam. His will said, “I wish to donate my eyes after my death and it has to be implemented.”

His demands have been supported by Gujarat Congress leaders, AAP chief Kejriwal. State BJP has yet not shown any sort of acceptance towards Patel’s demands.