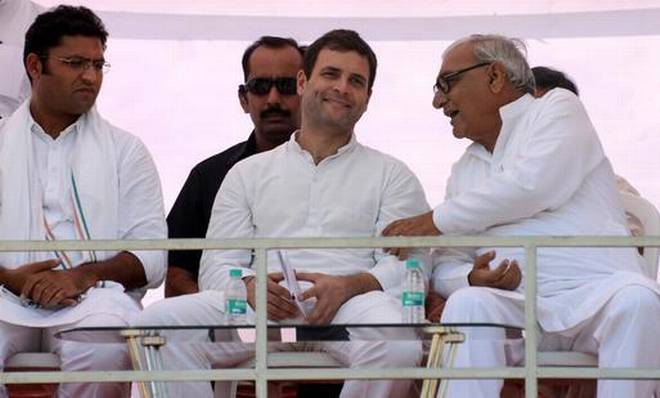 Haryana Congress President Ashok Tanwar called a meeting of party’s state leaders on June 12 to review the party’s poor show and to chalk out the strategy for the state polls scheduled for later this year. The meeting is slated to be held in Gurugram.

The decision to called a meeting by Ashok Tanwar comes days after a similar meeting was called by Former Chief Minister Bhupinder Singh Hooda, who called all his supporters for the meeting.

Talking to media about the meeting, Tanwar dismissed all claims about the rift within the party in the state and said all the state executives have been invited for the proposed meeting. Responding a query by a scribe over the invitation to Congress Veteran Hooda, Tanwar reasserted that all state executives will be coming for the meeting scheduled for June 12.

If Sources to be believed, it’s not all well in Haryana Congress. Reportedly, Congress State in-charge Ghulam Nabi Azad had walked out of the meeting in past after heated argument between Hooda Supporters and Tanwar Supporters.

Further, Congress State Chief Ashok Tanwar was also absent from the meeting on Sunday called by Hooda to discuss the further plan of action. All the MLAs, Formers MLAs, Former MPs were among present in the meeting called on Sunday. The meeting was called to chalk out a plan for upcoming State Polls.

The internal rift and the tussle within the state unit came to the forefront at Congress War room when Congress State Chief Ashok Tanwar had an ugly spat with many leaders after which an MLA Jiatirath Dahiya wrote to Congress President Rahul Gandhi.

Congress in the recently held national polls faced a humiliating defeat and bagged 52 seats which is just 8 more than what it got in 2014. In Haryana, it has lost all 10 seats of the state including Bhupinder Singh Hooda from Sonepat while his son Deepender Singh Hooda too lost from Rohtak, once a stronghold of the Hooda clan.

While the Assembly polls in the state are slated for October-November later this year.