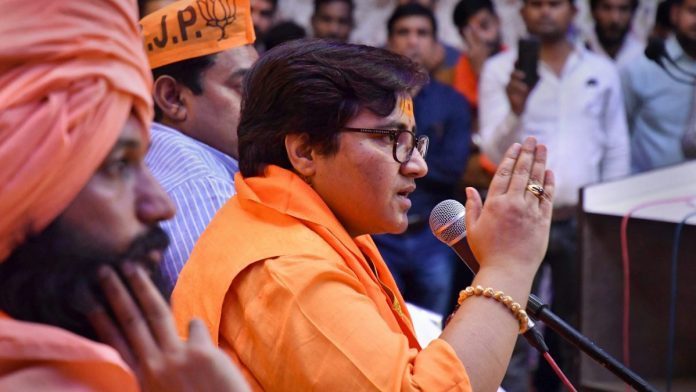 The Madhya Pradesh High Court on Thursday served a notice to BJP MP from Bhopal Sadhvi Pragya Singh Thakur on a plea filed against her election to the Lok Sabha. The plea filed by Bhopal-based Journalist, Rakesh Dixit, has alleged that the Malegaon blast accused had adopted ‘corrupt practices’ in her campaign to the national polls 2019.

Dixit, in his petition, has further stated that the Bharatiya Janata Party (BJP) leader whipped up communal passions in her campaign for the mega polls. The plea alleged that the BJP leader has violated Section 123 (3), seeking votes on religious grounds, of the Representation of the People’s Act (RPA), 1951, in a run-up to the national polls 2019.

The notice issued by the High Court Justice Vishal Dhagat directed BJP MP to file a response within 4 weeks.

Speaking to media, petitioner’s advocate Arvind Shrivastava alleged that BJP MP had made defamatory statements against her rival candidate Digvijay Singh and other candidates. ‘She had further made controversial statements for Hemant Karkare and Nathu Ram Godse’, he added.

Slamming BJP leader for seeking votes on religious ground, Shrivastava added, ‘She had said that she is proud of demolishing the Babri Masjid and was among those who did the task, she herself had also claimed that she is sent by God to save ‘Hindus’.

Sadhvi Pragya, BJP MP from Bhopal, has been charged in the Malegaon Blast Case. She is currently out on a bail in the case. It should be noted that the Court had dropped provisions of the Maharashtra Control of Organised Crime Act (MCOCA) against Sadhvi Pragya. However, she is being tried under the Unlawful Activities Prevention Act (UAPA).

In the national polls, Sadhvi Pragya Singh Thakur defeated Congress Stalwart Digvijay Singh with over 3 Lakh votes from Bhopal Lok Sabha Seat. She had faced intense heat because of her controversial comments in a run-up to the national polls.