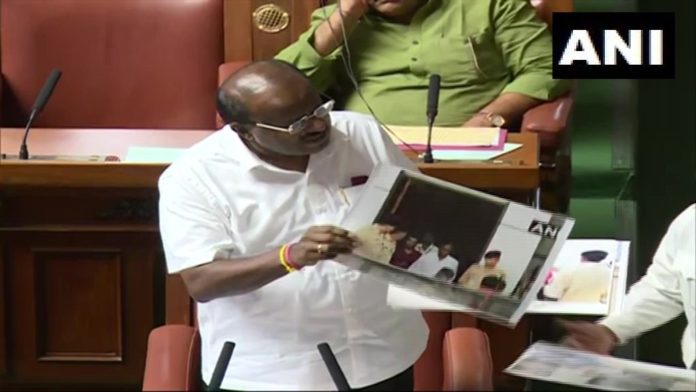 In what can be seen as a two-day relief to the HD Kumaraswamy-led coalition government, the Karnataka Assembly on Friday failed to meet the two deadlines set by the Governor Vajubhai Vala for the Chief Minister HD Kumaraswamy to prove the majority in the House. Now, the trust vote is now scheduled for Monday after the adjournment of House on Monday.

Former Chief Minister Yeddyurappa said, ‘Monday will be the last day for HD Kumaraswamy government, they don’t have numbers and they are not allowing the people who have numbers to form govt. We are 106 members totally. SC has said MLAs who are in Mumbai can’t be forced to attend the session’.

BJP Karnataka President,BS Yeddyurappa: Monday will be the last day for HD Kumaraswamy govt, they don't have numbers & they aren't allowing the people who have numbers to form govt. We are 106 members totally. SC has said MLAs who are in Mumbai can't be forced to attend session. pic.twitter.com/LFUpQxiUS7

READ: Karnataka: Governor writes to CM HD Kumaraswamy; asks to prove majority; CM leaves it to the speaker to take a call

While earlier in the day, leaders of the political parties exchange heated argument in the Assembly Session. Speaking in the House, Chief Minister said that he is leaving the decision of floor test on Assembly Speaker KR Ramesh Kumar. Speaking in the House, set for discussion after the adjournment, Chief Minister HD Kumaraswamy said that he would not act according to the Delhi (Governor).

HD Kumaraswamy said, ‘I leave the decision on the floor test to you (the Speaker). It won’t be directed by Delhi. I request you to protect me from the letter sent by the Governor’.

Before adjourning the session, Assembly Speaker KR Ramesh Kumar said that he is reiterating his appeal that this should end now’ and ‘The House will meet again on Monday’.

Earlier, while seeking time till Monday to prove the majority of the government, Congress Legislature Party Leader SG Siddaramaiah said that it will be unfair not to allow those who have not yet spoken. He said, ‘The coalition government is not running away, division of votes has to take place, Please allow us to finish by Monday’.

The Supreme Court on Wednesday ruled that the 15 rebel MLAs cannot be compelled to take part in the proceedings of the House.