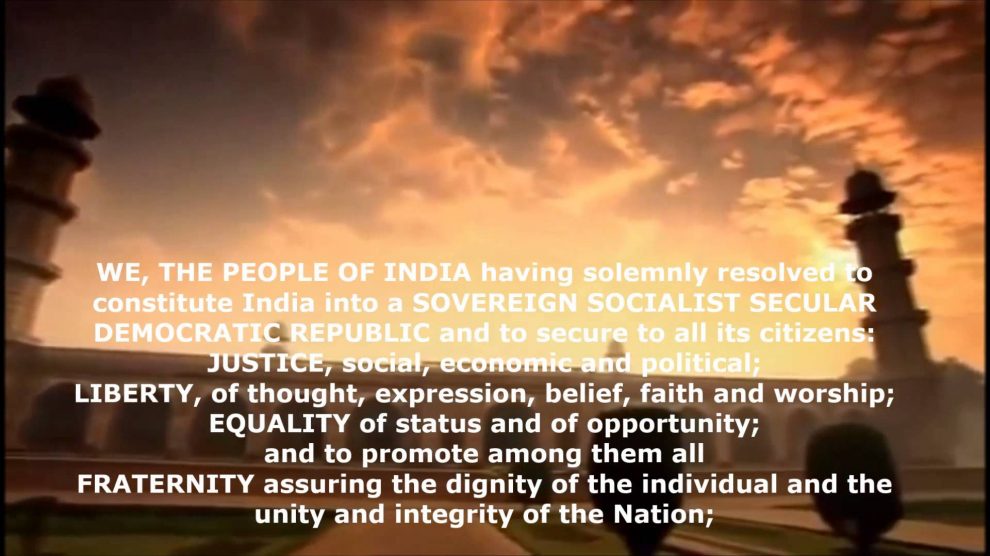 Opposition criticised Hegde’s words that BJP has come to power to change the constitution saying that it is age-old divisive agenda of RSS.

BJP leader and Union Minister of Skill Development and Entrepreneurship, Anantkumar Hegde, while speaking at an event organised by one Brahman Yuva Parishad in Koppal district of Karnataka, made a controversial statement which has kicked off chaos in the political equations questioning the Indian constitution.

This statement of Hegde has provoked strong criticism from the opposition and some are also of the view that the words of the BJP leader reflect the age-old ideology of the parent party of BJP- the RSS. The national spokesperson of Rashtriya Janta Dal Party, Manoj Kumar Jha responding to the statement of Hegde said that “Mr. Hegde is one of the poster boys of right-wing authoritarianism of the Hindutva forces and has simply uttered the intent of the RSS (Rashtriya Swayamsevak Sangh) as declared by its ideologue M.S. Golwalkar in Bunch of Thoughts. Mr. Hegde has only uncovered the latent desire of RSS and it must be seen as a warning signal for the citizens, political parties and civil society that the regime poses a massive threat to the idea of India and the spirit behind ‘We the People’ as enshrined in the preamble to the constitution of India.” Making scathing attacks on Hegde for challenging the secularism of India, Jha pulled Hegde down on Twitter saying “Mr.Anant Hegde ji! It is beyond your cognitive capacity to understand the parentage of secularists. I am a Hindu and I am secular and so are millions & millions of my friends who have a religious faith to follow but are secular. Read Gandhi, dear!

Mr.Anant Hegde ji! It is beyond your cognitive capacity to understand the parentage of secularists. I am a Hindu and I am secular and so are millions &millions of my friends who have a religious faith to follow but are https://t.co/ozM5o6hGyo Gandhi dear! pic.twitter.com/aexA1ZBKo1

Meanwhile, Vijoo Krishnan Communist Party of India (Marxist) leader from Karnataka alleged that making such statements is a deliberate attempt of the BJP to communalise politics ahead of the assembly elections due in Karnataka in 2018. “Both Hegde and Prathap Simha, BJP MP from Mysore, have been trying to make polarising statements for some time now. Clearly, there is an attempt by the BJP to deliberately communalise politics in Karnataka before the next assembly elections,” said Krishnan. He went on to allege the saffron party that after playing the communal politics during the Gujarat elections, the next target was Karnataka, which is soon to be poll-bound. He also added that a few days back a conversation was leaked in the media where BJP party President Amit Shah, was asking Anantkumar Hegde and Pratap Simha to organise militant protests all around the state of Karnataka. “The leaders have used occasions like Hanuman Jayantiand Tipu Sultan’s Jayanti to polarise the electorate on religious lines. Similarly, the saffron party has been trying to rake up communal controversies in syncretic shrines like Baba Budangiri. All this is being done with the election (scheduled for early 2018) in mind. After Gujarat elections, the BJP has perhaps understood that religious polarisation and stoking anti-Muslim sentiment among Hindus are its best bet,” he added.

Karnataka Chief Minister Siddramiah also attacking Hegde for his statements said that he was a messenger of hate and was trying to polarise the people on religious lines ahead of the polls. He also added that leaders like Hegde were trying to glorify only the Brahmins and the upper castes by ignoring the marginalised communities. “He has not learned the social conditions of the country. Since he is a Manuwadi, (follower of ancient text Manusmriti, which codifies caste practices and punishments), he doesn’t respect the Indian constitution,” the chief minister said.

Raising questions on Hegde as a minister and his contribution to the development of Karnataka, Karnataka Pradesh Congress Committee’s working president Dinesh Gundu Rao, in his statement during a press conference said that “Five-time MP M. Hegde was an unknown face before his induction into the Narendra Modi government. What are his contributions to the development of the state? Did he ever speak on Karnataka’s issues in parliament?”

Prakash Ambedkar, the grandson of B.R. Ambedkar and the leader of Maharashtra-based political organization Bharipa Bahujan Mahasangh responding to Hegde’s statement said that this is actually the dream of the RSS. In an interview with the media, he said that such statement coming, is not surprising as this has always been the dream of the RSS. He asserted that “even before the independence the RSS dreamed that once the British go away, they can have a Manuvadi system and varnasrama dharma can be imposed.” Further giving details about the time when the constitution was formed, he added that RSS was always against the ideology of equality and brotherhood.

During the interview, he also told that “Be it the adoption of parliamentary democracy or the state’s decision to have no religion, the RSS was opposed to all such clauses. It celebrated our independence day as a black day. If one sees a government resolution of July 26, 1949, one can see an agreement between the then home minister Sardar Patel and RSS chief Golwalkar. The resolution shows that Golwalkar had reluctantly accepted in writing to abide by the Indian constitution. We all know that it was banned after the assassination of Mahatma Gandhi. So, the RSS agreed to Patel’s conditions only to get the ban on it removed.”

This is not the first time that Hegde has made such controversial statements, in 2016 also he had equated Islam with terrorism following which he was arrested on charges of making hate speeches. He was quoted saying that as long as there is Islam in this world, there will be terrorism. He even made it to the news for his hate speeches when he said that if ‘Tipu Sultan Jayanti’ is celebrated so should the Jayanti of Ajmal Kasab, Haidar Ali, Afzal Guru, and Bin Laden be celebrated.

The BJP and the RSS who are of the Hindutva origin argued that during the time of amendment of the preamble, it was passed in the parliament without any debate. Since then there has been a question raising that should the words Socialist and Secular be added to the Indian constitution. Though there was no significant debate regarding the same until the first National Democratic Alliance government headed by Atal Bihari Vajpayee tried to begin a review of the Indian Constitution. A committee headed by former Chief Justice M N Venkatachalaiah also prepared a report regarding the changes that needed to be made in the constitution but the efforts were soon laid down by the opposition.

The opposition that time alleged that the NDA government under the leadership of Atal Bihari Vajpayee was trying to alter the basic structure of the constitution. As the BJP lacked the majority in the parliament the debate was soon closed and no changes were done in the constitution. However, this did not suppress the dream of the BJP and the RSS. The Hindutva voices once again became louder in 2014 when the NDA won a complete majority under the leadership of Prime Minister Narendra Modi.

Shiv Sena, who is a long time ally of the BJP and also of the Hindutva ideology, in 2015 demanded that the words ‘Socialist’ and ‘Secular’ be removed from the preamble of India. It was not just the Shiv Sena with the demand, but a Senior BJP leader in the Narendra Modi government had also issued a statement saying that a national debate should be organised on whether ‘secularism’ and ‘socialism’ should be in the Preamble.

In 2015, a Republic Day advertisement put up by the government significantly did not feature the words ‘Socialist’ and ‘Secular’ in the preamble. For this, the Union Home Minister Rajnath Singh had argued that the word secular was “misused”. In the Hindi text of the Constitution, the word translated to “panth nirpeksh” or denomination neutral, rather than “dharma nirpeksh” or religion neutral.

Understanding the word Secular as in the context it is used in the Indian Constitution and as it is often interpreted. The Indian Constitution says that India is a secular Country, which as understood by many is that all religions will be given equality in India. However, if the word secular or dharma be taken in the Hindi translated context, secular is nowhere related to the religion nor dharma is. Dharam means the duty or the righteousness. If taken in the Hindi translated meaning of the word dharma nirpeksh, secular means that the state will stay afar from religious matters but will abide by its duties.

While if talking about the word pant nirpeksh, Panth means ‘denomination’. The word ‘panth-nirpeksh’ thus means that as a state, India is not wedded to any denomination, which could also be religion.

Therefore it is necessary to understand the literal meaning in which the word secular is used in the Indian Constitution. Whether it is dharma nirpeksh or panth nirpeksh?

The debate over the inclusion of the word has been ever since the independence, the fathers and creators of the Indian constitution themselves believed in and breathed secularism, but refrained themselves from adding the word in the Constitution that time. The reason could have been many and according to the political experts, one of the main could be that the conditions and the circumstances prevailing that time were not favorable. As secularism would have meant a split within the Congress over socialistic and secular lines immediately after Partition, immediately after Independence and this would mean losing the newly won independence. However, the experts argue that when the situations were in favour, the constitution was amended and the words, Socialist and Secular, were added in the preamble.

The absence of the words earlier in the constitution did not mean that India was not a socialist and Secular country. India is one of the biggest democracy in the world which beholds a much complicated constitution within it. If seen from a larger perspective, under the Indian constitution it is the only country, in which a person can enjoy multiple identities simultaneously. An Indian can live with its religious identity, with its state identity, with its caste identity, with its professional identity. And questioning the existence of secularism and socialism in such a constitution can be a major cause of worry.

However, the BJP government has distanced itself from the controversial statements of its Union Minister Anantkumar Hegde. During the proceedings of the winter session on Wednesday, Union Minister Vijay Goel in the Rajya Sabha said that “The Government does not subscribe to views expressed by Hegde.” While the Union Defence Minister Nirmala Sitharaman in her statement outside the parliament said that “The government has already said it is not on the same page with Hedge. Only five days are left now in the session. I hope Opposition will come on board now.” Also, BJP spokesperson for Karnataka, Vamanacharya, was quoted saying to a media person that “The party (BJP) doesn’t want to get involved with what Hegde has said. What he spoke about is not an issue for us.”

There is no doubt that all political parties have been playing the trump card of communal politics as and when required. But the question is the as the citizens of India, be it a Hindu, Muslim, Christian or of any religious origin, when they chose their representative, do they keep the communal statics in mind? How secular and socialist is India today and do the people belonging to a religion other than the Hindu, need to be worried about their existence in India in the coming future?