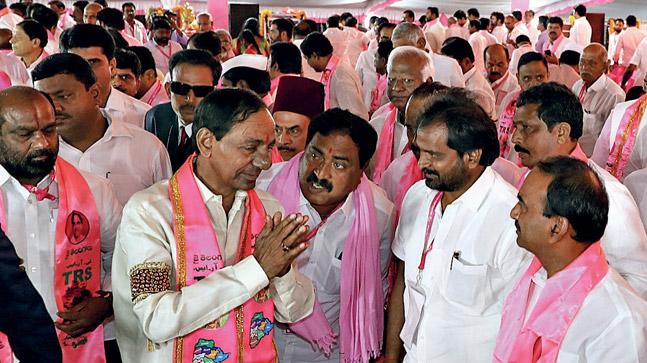 After TRS landslide Victory in Telangana Assembly Elections, TRS Boss K Chandrashekhar Rao is eyeing an entry in National politics. In a bid, he has been traveling extensively and meeting his other state counterparts including Odisha CM Naveen Patnaik and TMC Supremo Mamata Banerjee.

TRS, who is confident of winning 16 out of 17 Lok Sabha seats in the coming 2019 general elections in Telangana, wants to bring national focus to the TRS on the lines of Samajwadi Party, Bahujan Samaj Party and Trinamool Congress.

For that, the TRS will have to make its presence felt in Delhi. That is precisely why KCR led party has decided to set-up TRS party office in the national capital. If sources of the party are to be believed, The party is now in the process of identifying a suitable place for the construction of party office in Delhi.

The Centre has agreed to allot a 1000 square yards plot to the TRS for the construction of party office in Delhi. We are in the process of identifying the piece of land. Once we get it registered, we shall start the construction immediately,” a party leader said on condition of anonymity.

KCR has recently met Prime Minister Narendra Modi during his Delhi Visit. Reportedly, Former has assured the Prime that TRS would support BJP led alliance in Centre if it felt short of Majority.

Telangana Rashtriya Samithi Boss KCR, who is Known for his strong religious beliefs has appointed Vastu expert Sudhakar Teja who would also see the places and suggest plans as per Vastu. He will inspect a few sites and identify a suitable piece of land for the party office.

The chief minister wants the foundation stone for office to be laid after Sankranti and construction to complete in three months.