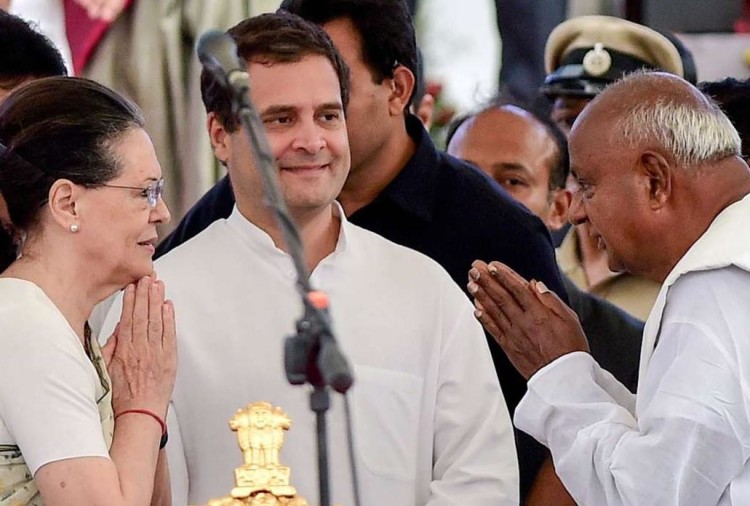 Ending long suspense over seat sharing in Karnataka, Indian National Congress and Janta Dal (Secular) on Wednesday finally sealed its pre-poll alliance to take on Bhartiya Janta Party in Karnataka in the Upcoming General Elections 2019. As per the statement released by the Rahul Gandhi-led party, Congress will on 20 seats while HD Deve Gowda-led party will contest on remaining 8 parliamentary seats.

Karnataka: Congress to contest on 20 seats and JD(S) to contest on 8 seats out of the 28 seats. #LokSabhaElections2019 pic.twitter.com/MLWZkkqnw6

Karnataka has a total of 28 Lok Sabha seats and the state will go to polls in two phases – April 18 and April 23.

As per AICC press release, Congress will field its candidates on 20 Parliamentary seats which Include:

While Janta Dal (Secular) will fight on 8 Lok Sabha seats, that includes Party’s turf Hassan and others are:

The seat-sharing came days after Congress President Rahul Gandhi and JD(S) Chief and Former PM HD Deve Gowda held parleys. ‘There are 28 seats in all. I have clinched 10 seats. A final decision will be taken after Rahul Gandhi discusses it with AICC General Secretary of Karnataka KC Venugopal and JD(S) National Secretary Danish Ali’ Gowda said after he held deliberations with Congress Chief on March 6.

Congress after Karnataka State Polls last year has extended Support to JD(S) and Chief Minister HD Kumaraswamy with an aim to keep BJP out of the power. However, in the last few months, many attempts were made to topple the Coalition Government.

While earlier on March 13, JD(S) Chief HD Deve Gowda announced his Grandson Prajwal Revanna Candidature from Hassan Lok Sabha Seat, one of the strongholds of the party.

Karnataka has a total of 28 Lok Sabha seats and polling for the Lok Sabha 2019 will be spread in two phases on April 18 and April 23.