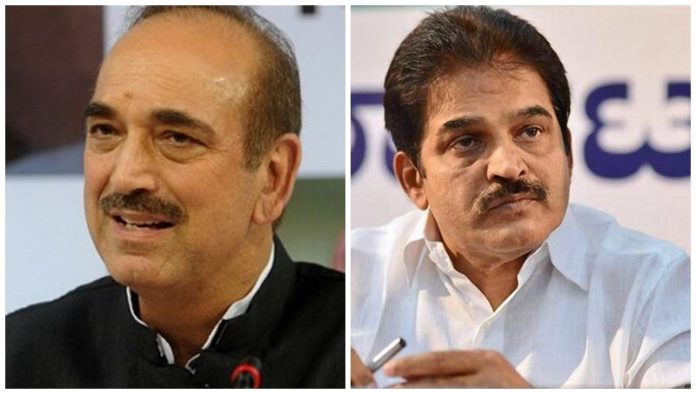 The Congress Party on Tuesday tasked two of its Senior Leaders to check the crisis in the Congress-JD(S) Coalition Government in Karnataka after poll debacle. The two Senior Leaders – Ghulam Nabi Azad and KC Venugopal have been rushed to the south state where Congress is a alliance partner with Janata Dal (Secular).

It came amid reports of two Congress MLAs – Ramesh Jarkiholi and Sudhakar – met Bharatiya Janata Party (BJP) Leaders at Former CM SM Krishna’s residence. However both the legislators have claimed that the meeting was not political.

Both the senior Leaders of the party Azad and Vengopal are expected to hold discussions with disgruntled MLAs to sort out all the differences to keep coalition government intact in Karnataka.

The tussle between the coalition has benefited the Bharatiya Janata Party in the state which swept the polls in the state bagging 25 Lok Sabha Seat. While JD(S)-Congress Coalition which is in power in the state managed to won one seat each.

While in another development on Tuesday, Karnataka Chief Minister HD Kumaraswamy met with Congress state chief Dinesh Gundu Rao and former chief minister SG Siddaramaiah. The trio is said to have discuss the post-poll strategies of the ruling alliance of Congress and JD-S in Karnataka.

The Karnataka Congress has also called a CLP meeting on May 29 in a bid to sort out all differences and to take the stock of the situation of its coalition government.

Earlier after landslide victory of the Bharatiya Janata Party in the recently held national polls, Chief Minister Kumaraswamy held an informal meeting of the Cabinet. Deputy Chief Minister G Parameshwara had on after ‘informal meet’ said that JD(S)-Congress combine government is safe and stable to continue in office despite electoral reverses in the 2019 Lok Sabha elections.