The Indian Wire » Politics » Politics heat up in UP; Congress workers want Priyanka Gandhi to take on PM Modi in Varanasi in LS Polls 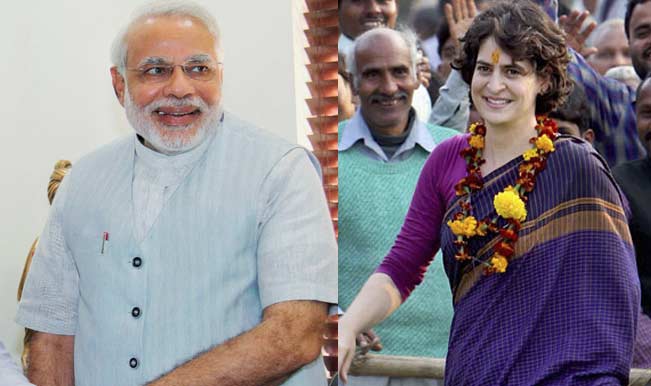 With the formal and much-awaited entry of Priyanka Gandhi in the national politics, the political temperature in the Uttar Pradesh has started to heat up. In a surprising development on Thursday, Posters urging Priyanka Gandhi to contest the coming Lok Sabha elections from Varanasi to challenge the Prime Minister Narendra Modi came up in the holy city on Thursday reportedly.

The Posters featuring Rahul Gandhi, Priyanka Gandhi and Ajay Rai came up in the city. Rai had in 2014 unsuccessfully contested Lok Sabha against Narendra Modi. Posters having Priyanka in the Middle while Rahul and Rai on Top featured lines, “Kashi Ki Janta Kare Pukar, Priyanka Gandhi Ho Sansad Hamar. We want Priyanka“, was printed in bold letters in the centre of the posters.

The local unit of the Congress too demanded that Priyanka, who formally entered politics on Wednesday and was appointed the general secretary for Uttar Pradesh East, be pitted directly against Modi to galvanise voters of UP and neighbouring states.

Ajay Rai, who had lost to Narendra Modi in 2014 General Elections, also pitched the same demand, he said as quoted by ANI, “The Congress party soldiers (workers) are ready to make her (Priyanka) win the elections from the temple town constituency… If she contests from here, the impact would be felt in the neighbouring states as well,”

While asserting the confident of his party pulling up the the Lok Sabha 2019 Polls as well as State Polls in 2022, he added, “The wave of PM Modi has now faded as people want to get rid of the Modi-Shah misrule who have ruined the lives of scorers of small businessmen and rendered thousands of people jobless due to their faulty policies and chest thumping.”

Earlier in a move that surprise everyone, Congress had on January 23 appointed Priyanka Gandhi as the General Secretary of Uttar Pradesh East. Apart from this, KC Venugopal will SCINDItake over the reins of the party’s general secretary (organisation) from Ashok Gehlot. Congress has also given responsibility to Jyotiraditya Scindia as the general secretary for Uttar Pradesh (West), while Ghulam Nabi Azad has been given the responsibility in Haryana.

She is expected to take charge from the first week of the month.

Congress ever since kept out of the SP-BSP alliance is leaving no stone unturned to make a strong presence in the state that sends 80 parliamentarians to the Lok Sabha. Congress intensifies Mission UP; Rahul Gandhi on his two-day visit to home turf Amethi

ALSO READ: Reactions ‘pouring in’ with formal entry of Priyanka Gandhi into politics; a look at ‘who says what’