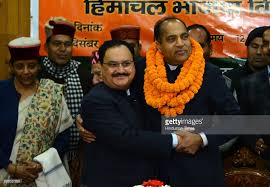 The newly elected members of the Himachal Pradesh Assembly on Sunday elected Jairam Thakur as their new leader drafting the way for him to take oath as Chief Minister of the Bharatiya Janata Party government (BJP) on December 27.

In his first reaction Mr. Jairam Thakur thanked the entire party leadership and expressed gratitude towards the people of the State and Mandi district. He met the Governor along with other senior leaders and staked the claim to form the next government.

The 52-year-old, five-time MLA from Siraj constituency in Mandi district is going to be the sixth Chief Minister of the hill State.

Debonair and soft-spoken, Mr. Thakur first got elected to the State Vidhan Sabha in 1998 during the first Prem Kumar Dhumal government from Chahiot, which has now been renamed as Siraj after the delimitation.

Former RSS pracharak and ABVP activist from the local college in Mandi, he is going to be the first CM from Mandi district, which is the second largest district after Kangra, sending 10 MLAs to the Assembly. This time he has helped make the district totally ‘Congress-mukt (free)’ as the party won nine seats out of 10, with a party sympathizer winning the tenth seat of Jogindernagar.

The Party’s central observers and Union Ministers Nirmala Sitharaman, Narendra Tomar and JP Nadda in the presence of State party in-charge Mangal Pandey, all MPs and other senior leaders, announced his name at a meeting in Shimla.

On Saturday, Mr. Dhumal had made his position clear that he would no longer be a contender for the top post. It was then believed that Mr. Nadda would be the high command’s choice.

However, the high drama and suspense going on since December 18 ended when Mr. Thakur’s name was unanimously accepted by the elected MLAs and the high command.

BJP won 9 out of the ten seats in Mandi bolstered Jairam Thakur’s chances. The party has also chosen a Rajput as the community constitutes around 33% of the electorate, around nine percent more than the Brahmins, the caste that Nadda belongs to.

It is believed that the Prime Minister did not want to spare Mr. Nadda from his duties at the Centre and his organizational role at the top.

A relatively younger leader, Mr. Thakur having the required RSS backing became the automatic choice for the top post.

An agriculturist by profession, he had also remained State BJP president and a Minister of Panchayati Raj and Rural Development in the second Dhumal government of 2007-12. He has two daughters and his wife Sadhana Thakur is a practicing government doctor.

There is a strong wave of jubilation going on in his home district of Mandi from past many days after the party’s Chief Minister-designate Prem Kumar Dhumal lost the elections from his own constituency of Sujanpur in Hamirpur district. The people in Mandi were confident this time that they would get the first ever Chief Minister from this district since they had given such a lead to the party.

Earlier also Mr. Karam Singh Thakur from Chachiot in Mandi who came close to become the Chief Minister in early sixties remained a number two in the first Dr. YS Parmar cabinet. Then it was Mr. Sukhram in 1993 who was the high command’s candidate for the chief ministership but he was not accepted by Mr. Virbhadra Singh and his supporters here. Later in 2012, it was Mr. Kaul Singh from Drang in Mandi who was the Congress president but was replaced by Mr. Virbhadra Singh again when the party came into power. 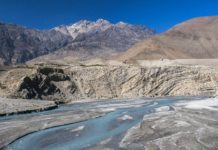