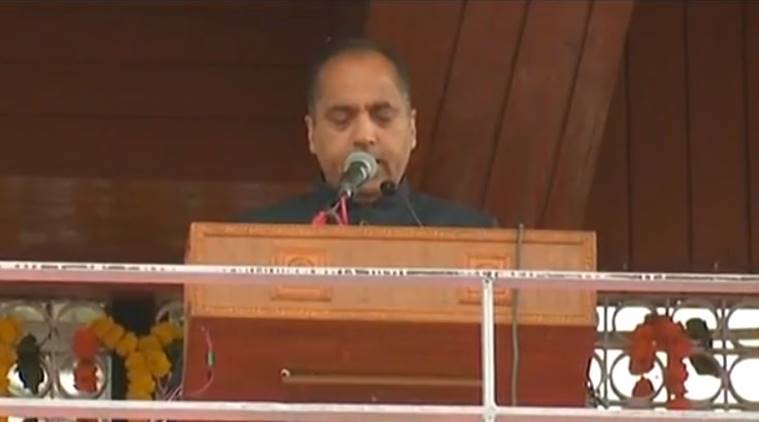 The five-time BJP MLA, Jairam Thakur took oath as the 14th Chief Minister of Himachal Pradesh on Wednesday under the administration of Governor Acharya Devvrat. He was chosen as the chief ministerial face by the BJP central leadership, after Prem Kumar Dhumal, who was supposed to be the CM, lost the elections from Sujanpur assembly.

During the election campaigning in Himachal Pradesh, BJP Party President Amit Shah had indicated that Prem Kumar Dhumal would be the Chief Minister if BJP came to power. However, after the results were announced on 18 Dec, though BJP won the polls, but Prem Kumar Dhumal was defeated from the Sujanpur assembly seat. Following his defeat, bean the race for the next probable candidate for the top most post in the hill state. Jairam Thakur and JP Nadda were the two prominent names that were making to the top of the list.

Soon after the results were announced, the BJP parliamentary committee had formed a two member team each for Gujarat and Himachal to decide for the probable candidates for the post. Union Defence Minister Nirmala Sitharaman and Rural Development Minister Narendra Singh Tomar. The two-member team reached Himachal Pradesh and held a number of meetings with many MLAs to know their opinion. On Friday while, the team met various party leaders and RSS functionaries, to select the next Chief Minister, a sharp rift emerged between the supporters of Prem Kumar Dhumal and Jai Ram Thakur.

The supporters of Dhumal were still hoping for him to become the Chief Minister, they also questioned the decision to shift Dhumal from his original seat at Hamirpur to Sujanpur, where it was clear that despite his candidature, it was difficult to defeat the Congress leader, Rajinder Rana.

After the meetings conducted by the two member team, and their report submitted to the BJP Parliamentary committee, on 25 Dec it was announced that Jairam Thakur would be the next Chief Minister of Himachal Pradesh. As per the political expert, the main reason for choosing Thakur to be the next CM in Himachal was in wake of the caste equations in the state. Thakur is from the Rajput community and appointing a Rajput Chief Minister would definitely favour the BJP, hence Thakur was chosen.

Ahead of the ceremony, Massive security and other arrangements were made for the grand function. The Ridge Maidan, Annandale helipad, and Shimla’s Jubbarhatti airport were under the surveillance of Special Protection Group (SPG). DGP of Himachal Pradesh Somesh Goyal said that “Security has been beefed up with over 1,000 security personnel, intelligence personnel in plain clothes, and sharp shooters deployed at several locations. All entry points at interstate borders are under vigil.”