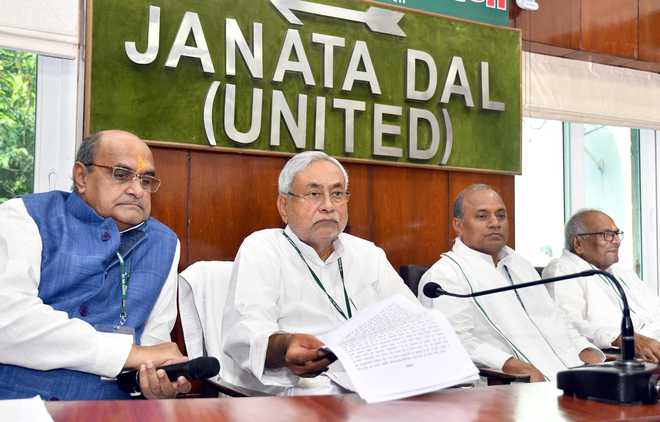 Days after getting regional party status in Arunachal Pradesh, Bihar ruling party, JD(U) on Sunday announced that it will contest the upcoming polls in four states on its own. The party said that barring Centre and Bihar, it is not a party of BJP-led NDA and will contest poll all alone.

The four states that Nitish Kumar party is eyeing to be in the fray include the national capital Delhi, Haryana, Jharkhand and Jammu & Kashmir. Assembly polls in all these states are slated in the coming months.

Talking to media after party national executive meeting, JD-U Spokesperson KC Tyagi confirmed the development and said, Except Bihar and at Centre, we are not part of the BJP-led NDA’.

We are planning to contest 81 assembly seats in Jharkhand, said KC Tyagi on Sunday.

Responding about JD-U Vice President Prashant Kishore‘s company strategizing and helping in for Mamata Banerjee‘s TMC campaign, Tyagi made it clear that the party, as well as national president Nitish Kumar,  had no issues with this.

He said, ‘Nitish Kumar and Prashant Kishore discussed the issue. The party has no problem with this. Kishore’s IPAC has time and again worked for many political parties, be it YSRCP in Andhra or Shiv Sena in Maharashtra, We have no issues with Mamata Banerjee roped in Prashant Kishore.

The announcement to contest state polls in 4 states comes days after, the Election Commission of India on Friday granted recognization to Janata Dal (United) as a state party in Arunachal Pradesh. The Electoral Symbol ‘arrow’ has been allotted to JD-U as a reserved symbol to party in the state.

While it should be noted that BJP ally JD-U opted out of Cabinet race hinting that the party was willing to have more berth than it is been offered by the BJP.

Janata Dal (United) contested the national polls in an alliance with Bharatiya Janata Party in Bihar. It has bagged 16 out of 17 contested Seat in Bihar that has a total of 40 Lok Sabha Seats. Ram Vilas Paswan’s LJP was also an alliance partner of BJP and JD-U in Bihar that sends 40 Parliamentarians.