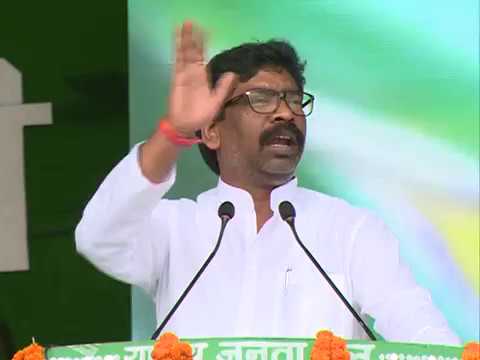 In the wake up of upcoming assembly polls in Jharkhand, Congress party is finding it hard to collaborate with regional parties over the candidature of the chief ministerial post. According to credible sources, it has been reported that Congress doesn’t support the nomination of Jharkhand Mukti Morcha leader Hemant Soren.

Congress party is still to appoint its new state president for Jharkhand as Jharkhand Pradesh Congress chief Ajoy Kumar had resigned on August 9 due to the indulgence of party members in corruption.

Ajoy Kumar had sent his resignation letter to Congress chief Rahul Gandhi. He had pointed out at some party members for putting their self-interest over the party’s ideals. His letter read, “Their only intention is to grab power, sell tickets or collect money in the name of elections. As a proud Indian and one of the youngest winners of the Police gallantry award and having wiped the mafia in Jamshedpur. I can confidently say that the worst criminals look better than some of my colleagues.

Congress party had performed badly in Jharkhand in Lok Sabha elections 2019. In a party meeting between Sonia Gandhi and other senior leaders, Jharkhand in-charge chief informed the interim president about the political situation of the state. Senior leader Subodh Kant Sahay also raised the party’s concerns in the meeting. He extended his support to Hemant Soren for nomination as a member, but not as a face of Chief Minister.

While Congress is still struggling to sort out its internal issues, BJP has already kickstarted its campaign with the announcement of election chief few weeks go. National General Secretary Om Prakash Mathur has been made as Election In-charge, while for the post of Election Co-Incharge, Bihar Minister Nand Kishore Yadav has been appointed in the state.