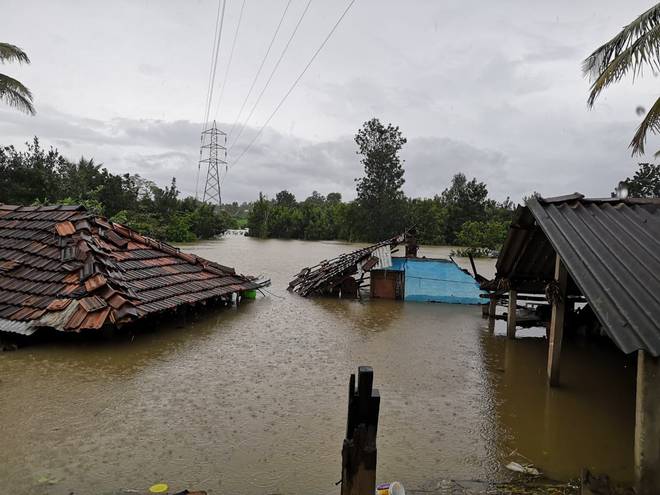 Karnataka Congress leaders met Karnataka Governor Vajubhai Vala on Thursday asking for the release of Rs. 5000 crore as an interim relief from Centre to tackle flood situation in the state.

The leaders also demanded that the flood situation in the state should be declared as “natural calamity”. For putting their demands upfront, the Congress leaders submitted a Memorandum which read, “Situation in Karnataka should be declared as ‘National Calamity’. There should be an immediate release of Rs 5,000 crores as interim relief. The centre should provide special grants for drought-affected areas for this year.” Karnataka floods have devastated the state and caused a huge loss to the life and property in the state. It has been reported that at least 88 people were killed and around lakhs of hectares of standing crops have been damaged in the state due to nature’s fury. Over 55,000 houses have been reported to be damaged. Shivamogga district is said to be one of the worst-affected areas in the state.

According to the Congress party’s letter, the damages in the flood-affected areas have been more than Rs 32,000 crores, yet BS Yeddyurappa government in Karnataka has only released Rs 374 crores to deal with the crisis.

Congress leaders can be seen reaching out to the administration for helping flood-affected victims in the southern states. In adjoining state of Kerala, Rahul Gandhi wrote letters to the Union Minister of Agriculture Narendra Tomar, Union Health Minister Dr. Harsh Vardhan and Union Transport Minister Nitin Gadkari seeking their help in rehabilitating the affected people in the Kerala state.