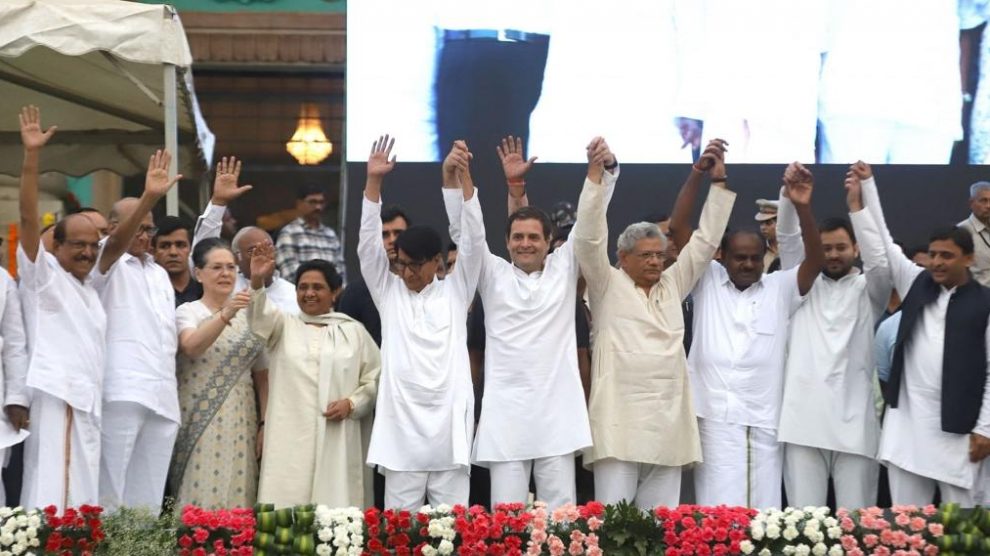 Janata Dal (Secular) leader HD Kumaraswamy was sworn in as the newly-elected chief minister of Karnataka yesterday in the presence of senior leaders of several anti-BJP parties.

Kumaraswamy, along with state Congress chief G. Parameshwara as his deputy chief minister, was administered the oath by Karnataka governor Vajubhai Vala in the backdrop of Bengaluru’s iconic Vidhana Soudha. Kumaraswamy will allocate portfolios to legislators as agreed between him and Rahul Gandhi after his government passes a trust vote on Friday.

The event proved to be a lot more than a regular ceremonial oath-taking ceremony as leaders of more than a dozen anti-BJP parties from all parts of the country were present there for showcasing their unity against the ruling dispensation.

The event was riddled with the symbolism of strong anti-BJP opposition unity as even local rivals like Mayawati and Akhilesh Yadav of Uttar Pradesh was seen conversing politely. Even TMC chief Mamata Banerjee and Sitaram Yechury, who share bitter animosity in Bengal, were seen sharing the stage and greeting each other, indicating that opposition parties are willing to keep local rivalries aside at the national level in order to keep BJP away.

While BJP boycotted the ceremony, terming the government as the result of an “unholy” alliance, media reports reveal that NDA ally Shiv Sena’s chief Udhav Thackeray had also been invited but he had politely declined to cite the upcoming Palghar Lok Sabha by-polls as the reason for his inability to attend the event.