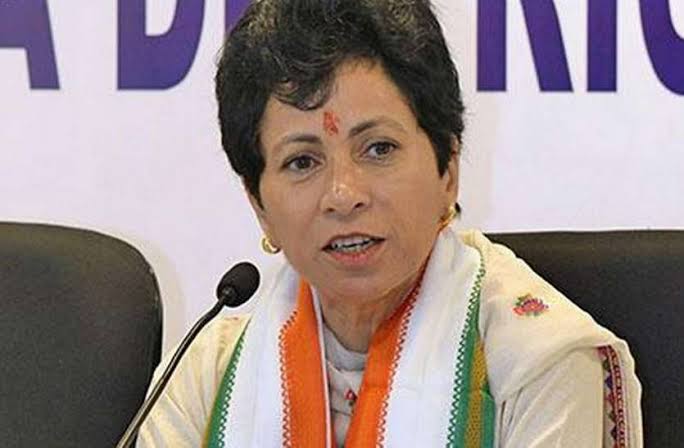 Expressing her views to the media on the newly formed government in Haryana, State president for Congress party, Kumari Selja on Wednesday said that her party will play the role of strong opposition in Haryana.

As quoted by ANI, she said, “The party will raise strongly the public issues inside or outside the Assembly and on the streets“. Kumari Selja also attacked the BJP government for using issues like Article 370 and NRC in the election campaign. She said that the saffron party hid its failures under the garb of these fabricated issues. She further added, “In elections, the BJP tried its best to mislead the people. were raised to hide the failure of the five-year BJP regime. Despite all efforts to mislead the people of the state through fake publicity and by other means, the BJP found it difficult to get a majority”.

BJP won on 40 seats, while Congress bagged 31 seats. However, BJP allied with Dushyant Chautala-led JJP which won on 10 seats in the state. The saffron party also received the support of a few independent candidates. Owing to this, the Bhartiya Janta Party has been successful in forming the government. The oath ceremony for the same took place on Sunday.

She also termed the BJP-JJP alliance government as an “unholy nexus between two conflicting parties“. She said that history is a witness that whenever such mismatched alliances have been made, they have failed to govern effectively and ultimately being rejected by the people.

A meeting of the Haryana Congress Legislature Party will be held at 11 am in the Party office at Sector 9 Chandigarh on November 1st, 2019 to elect CLP leader.

The leader also slammed the exit polls surveys that showed BJP victory by terming them as fake and biased and influential. She claimed that such surveys were the reasons that made the saffron party won.

According to the information provided by her, the party’s membership campaign will be launched soon in the state and elections for the organization will also be conducted. She said that the party will give preference to those leaders and the workers, who have raised public issues and work at the grass-root level.