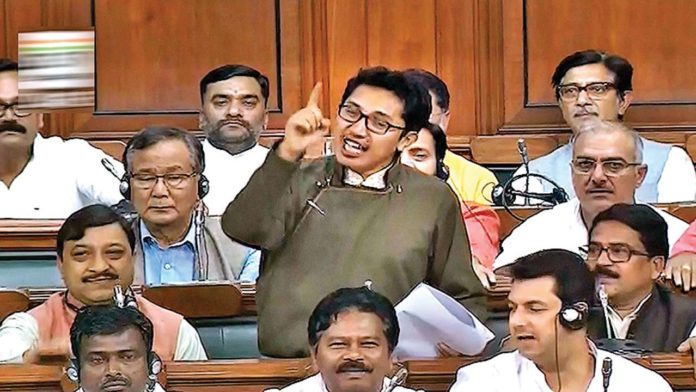 The MP further went onto expressing the pain of Ladakh people who have been left at their own mercy because of an ignorant administration. Prime Minister Narendra Modi has hailed his speech and shared it across all social media.

My young friend, Jamyang Tsering Namgyal who is @MPLadakh delivered an outstanding speech in the Lok Sabha while discussing key bills on J&K. He coherently presents the aspirations of our sisters and brothers from Ladakh. It is a must hear! https://t.co/XN8dGcTwx6

The MP said in the house that this decision will only lead to the loss of bread for two families in Kashmir. He is said to be targeting The Mehbooba Mufti family and Farooq Abdullah clan.

He, as quoted by ANI, said, “What will be lost with this decision? Only two families will lose their bread and butter but the future of Kashmir is going to be bright.”

He further accused the Congress government of ignoring the Ladakh’s development when they were in power. He slammed Congress of the move when the party created 8 districts in the erstwhile state, and none of the districts was given to Ladakh. He also lashed out at the people who never understood the real pain of Ladakh, rather just kept on leading the cause from merely reading the books.

In a passionate manner, MP Jamyang Tsering Namgyal kept on talking about the unique culture, tradition, food style of Ladakh people. He also informed the house regarding the struggle of Ladakh demanding Union Territory status. He went on mentioning about the harsh geographical and climatic condition of Ladakh.

On Monday, The Bill to reorganize Jammu and Kashmir state into 2 Union territories was moved. According to which, The former state now consists of 2 UTs, one being Jammu & Kashmir while other UT being Ladakh. Ladakh is celebrating this decision.