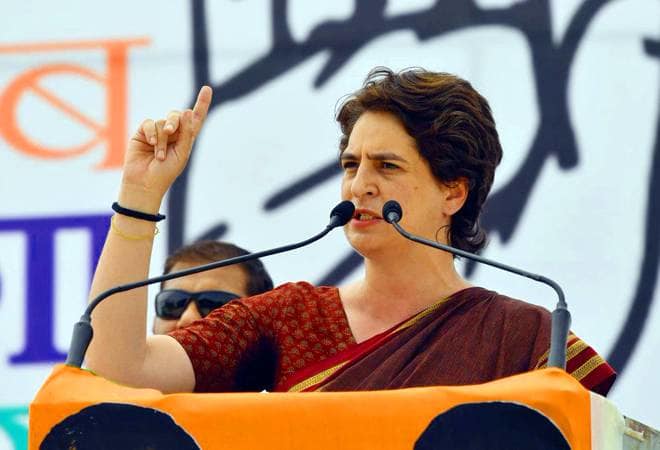 While addressing a rally in Siddharthnagar Uttar Pradesh, Congress general Secretary Priyanka Gandhi Vadra said that the minimum days of guaranteed employment under Mahatma Gandhi National Rural Employment Guarantee Act (MNREGA) will be increased from a hundred to 150 days.

Making a Congress strong upfront, Priyanka Gandhi Vadra said that the party has sought ways to solve the problem of unemployment in the country. She added “we have decided to increase the minimum number of days from a hundred to 150 under MNREGA. You will also get your wages on time just like it was under Congress rule till 2014.”

She added unlike the BJP’s Jumlas of “giving 15 lacs in every person’s account, the Congress scheme will give hope to the Indians from the poor section of the society. ”

Praising the NYAY scheme by the Congress Party and terming it as a ‘game changer’ for the country Priyanka Gandhi added, “people who were treated by the 15 lakh in every person account Jumla of the Modi government in 2014 have lost hope up and the NYAY scheme is meant to keep the hope of escaping the method of poverty for the poor section.”

Targeting the Narendra Modi government, Priyanka Gandhi said that 5 crore job opportunities were destroyed during PM Modi’s rule after the demonetization took place. She added that the Congress party will not only fill up the government jobs that are lying vacant but will also ensure that entrepreneurs get a positive atmosphere to work.

Priyanka Vadra promises that Congress will create 10 lakh jobs at the village level. Due to demonetization and other policies of Bharatiya Janata party over 5 crore jobs have lost with over 50 lacs due to the demonetization only the factor. 24 lakhs government jobs lying vacant will be filled by the Congress government before March 2020. Entrepreneurs will be able to start their work and business without any hustle and will also be benefited in the form of tax cuts for employing more people.

Uttar Pradesh has gone to polls in the 5 phases of elections on April 11, April 18, April 23, April 29, and May 6. The remaining two phases for the Lok Sabha elections will be held on May 12 and May 19. Results for the 17th Lok Sabha will be announced on May 23.