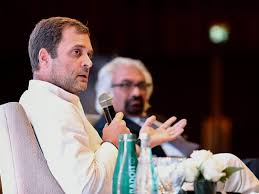 Alleging the Congress president Rahul Gandhi on discrepancies in his candidature, Amethi Returning officer, Ram Manohar Mishra has ordered the postponement of the scrutiny of his nomination papers in Amethi to April 22 ahead of the Lok Sabha Poll.

An independent candidate from the Amethi parliamentary constituency, Dhruv Lal, has filed a case against Congress president Rahul Gandhi alleging him of submitting the fake document in his nomination.

Ravi Prakash, an advocate of Dhruv Lal has alleged that there are three main important issues that need to be discussed before Rahul Gandhi is declared the candidate from Amethi. He said that one of the issues that have raised is on the basis of “a certificate of incorporation of a company registered in the United Kingdom, where Rahul Gandhi has declared himself as a UK citizen” that bars him from contesting the election under the Representation of People Act as a non-Indian citizen.

Prakash said that the educational qualification of Rahul Gandhi has been under speculation since long. He said that his documents do not match the educational qualifications he claims. He has used the name, ‘Raul Vinci’ in his college and there are no certificates available in his name. Prakash said that there should be clarity on if Rahul Gandhi and Raul Vinci are the same people. He has asked that Rahul Gandhi should present his original certificates so that they can be verified and his electoral process can be continued.

The lawyer said that if he is a citizen of the UK, on what terms did he receive Indian citizenship. He also alleged that Rahul Gandhi has not mentioned any details of his possession of any assets in the UK company during the period of 2003 to 2009. Prakash said that until this matter is clarified, Returning Officers shall hold the nomination papers of Rahul Gandhi.

The Lok Sabha elections for two phases have taken place on April 11 and April 18. The remaining five phases of elections will continue till May 19. The results will be announced on May 23.

Lok Sabha Polls: Arun Jaitley takes a jibe on opposition accusing for ‘Rent a cause’ campaign